2Baba rolls back the years with top performance at Lagos event, fans react

Legendary singer, showed why he’s loved by many after delivering a top performance for guests at Connack Foundation’s 10th Year Anniversary and unveiling event held in Lagos on April 29, 2022. 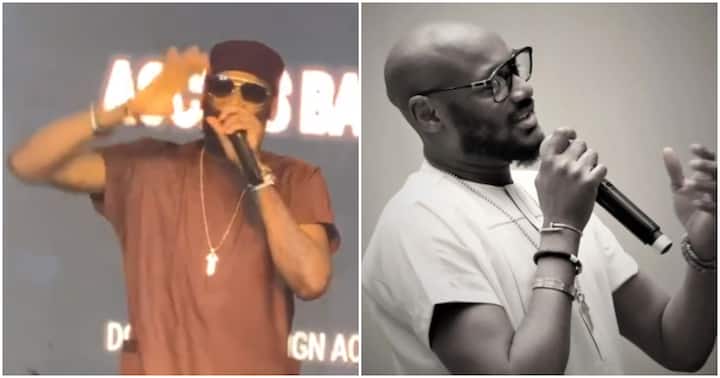 The event also saw an impressive performance from Toiner B, the winner of the foundation’s Talent Hunt competition.

Founded by Ken Nnamdi Ukeagu in 2012, the foundation seeks to tackle youth unemployment that has over time resulted in social malice and redundancy.

Speaking at the event, CEO of the foundation Mrs. Carole Emeka Sunday revealed that the next project they will be embarking on is the provision of a borehole complete with water treatment for Igando community in Alimosho L.G.A.

This is coming after 2Baba’s son with Simbi Adeboye gave a heart-warming speech at his mother’s recent birthday ceremony.

Zion said loads of nice things his mother has been doing for him and his sibling, Nino and guests couldn’t help but applaud him as the celebrant was left gushing and proud of her son.

A number of social media users who have watched the singer’s performance at the event commended him for his classic delivery.

“2Baba keep giving people back to back, that was a classic delivery.”

“You see this stage and crowd control, give it to 2baba he’s got it for life.”

FCT, Abuja – A report by the Daily Sun newspaper indicates that aspirants on the platform of the ruling All Progressives Congress (APC) are currently in confusion and fear over the modality the candidate of the party will emerge after the primaries for the 2023 presidential election. Although the aspirants have been declaring and have even started purchasing the party’s N100 million expression of interest and nomination forms, however, many of them are groping in the dark and uncertain about how the party’s candidate will finally emerge.