DropItChallenge: 74-Year-Old Pete Edochie, Kanayo, Others Rock Red Robes for Ritualists Entry, Clip Goes Viral, Social media users are already getting bored of the viral #DropItChallenge but not a lot could look past an entry from some veteran Nollywood entertainers. 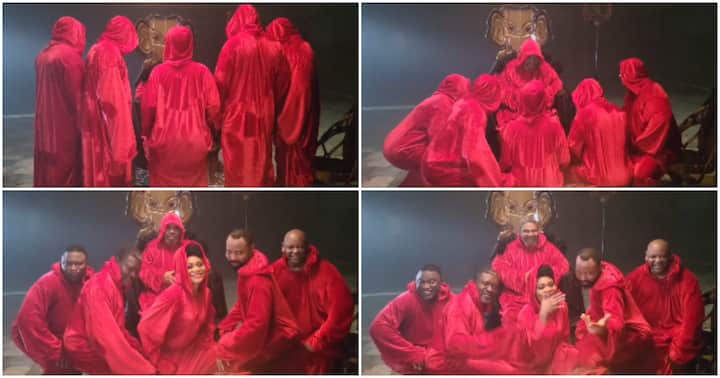 The actors Pete Edochi, Kanayo O. Kanayo, Bassey Ekpeyong, Femi Branch among others appeared to have taken a moment to shoot the entry while on a movie set.

74-year-old Edochie assumed the post of the leader as he was seated on a platform with the other actors forming a cluster in front of him.

The movie stars all donned red robes as they occasionally bent in sync to Beyonce’s Partition song which is the anthem of the challenge.

“Talk about mic drop … challenge has finished.. we can all go to bed.

soljabhoy llenge finally made it to nna anyi sacri altar.”

“Pete edochie and kanayo?? nobody is safe THOSE 2 are worse than RUSSIA.”

“It has gone spiritual … now it is finished . It will now be bloody.”

“Daddy Pete was confused at first like what’s this people doing.”