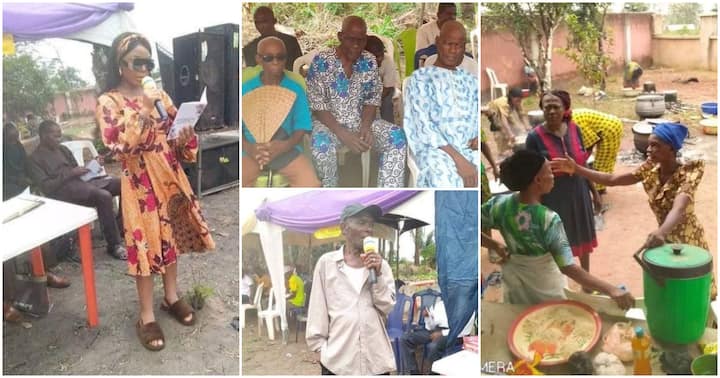 The BBNaija star recently lost her dad and he has finally been buried with family members and people in the society witnessing his send forth.

Several snaps soon went viral from Ifu Ennada’s dad’s burial and internet users seemed to have a lot to say about it.

The photos were taken in very humble settings and the villagers themselves also looked modest during the simple burial.

In one photo, women were seen gathered around some food items as they cooked for the occasion. In another snap, Ifu was also seen wearing humble clothes as she held the microphone and addressed the small gathering.

Some old men also sat on the available plastic chairs that had been arranged under a canopy as they witnessed the small event.

See the photos below:

Ifu Ennada’s father’s burial photos were no doubt a far cry from what fans had been used to from the reality star and it caused quite a buzz online. While some people noted that Ifu never claimed to be rich, others said that she should have taken care of her home first.

“Lol. This is meant to shame her? How much has she made in her whole life? How many people will she help? Kmt.”

“No be Ifu wey talk say she Dey make 15million per day be that? Abi my eye Dey pain me?”

“Take care of home before impressing the streets.”

“May the soul of the faithful departed through the mercy of God rest in peace AMEN .”

“Everything is a joke for you guys, some one cannot even bury their lost one in peace again,, may the soul of the departed rest in peace and may God give the family the strength to live.”

“Chai, with all the wealth she flaunt online see her papa burial may God have “mercy” apan us.”

“Ifu has always been herself. Struggling and all. She’s not been one of those doing more than herself. Let’s not forget that. May her dad’s soul Rest In Peace ✌.”

“She no go thief do burial na, next please.”

Davido reaches out to man who drew him & posted online, tells him to send it