Actor Salami Rotimi Escapes Kidnap Attempt, Cries Out on Social Media After Scary Ordeal, Shares Details, Nigerian actor, Salami Rotimi, has cried out on social media after he was nearly a victim of kidnapping. 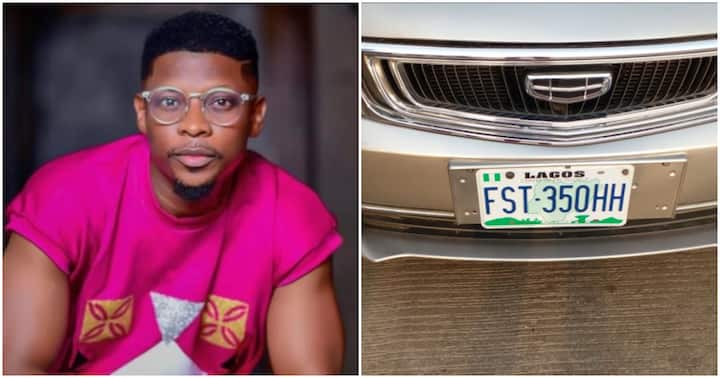 Taking to his official Instagram page, the obviously flustered film star explained how the event happened to his numerous followers.

Rotimi started off by sharing a photo of the grey car used for the operation with plate number FST350HH.

The actor then accompanied the photo with a short caption where he noted that about three men were involved.

According to Rotimi, he boycotted the kidnappers and parked his destroyed car on a busy road with a lot of people to witness the event.

The film star then noted that the evil men caught up with him and the driver among them rushed to him, and attacked, claiming that he bashed their car.

“This is the car where the guys who wanted to kidnap me.. because i boycoutted them and parked with my destroyed car where there were lots of people … they catched up with me and the driver rushed to me and attacked claiming i batched their car. Three of them in the car.”

See a photo of the car below:

After Rotimi shared his scary ordeal online, numerous fans and some of his celebrity colleagues showed their concern.

“God keep keeping us all.”

“Imagine this is really getting too much ♂️ in Nigeria now thay will be blaming it on yahoo boys#☹️.”

“Yesterday I had it tough with a bike rider between Agbowa and Itokin. They were two and realised I was a lady behind the wheels and the only person in the car. We had it really tough. My target was to push them into the ocean. Awon were. He stopped at Itokin where there were people and tried to council me about driving. I didn’t listen to him. I had the confidence of the people around. He rode towards Epe road and I went the opposite way. May God help us o.”

“Hmmm!! Nawa oo , God will continue to protect you.”

“Plz stay safe sir❤️❤️❤️ may the Lord guide you through❤️❤️.”

“ everything just tire person for this country pleaee be careful oo baba.”