Just Like Mummy: 5 Times Mercy Johnson’s Last Born Divine Has Flaunted Acting Skills in Front of a Camera, A lot of kids are often camera shy but the same cannot be said of actress Mercy Johnson Okojie’s children. 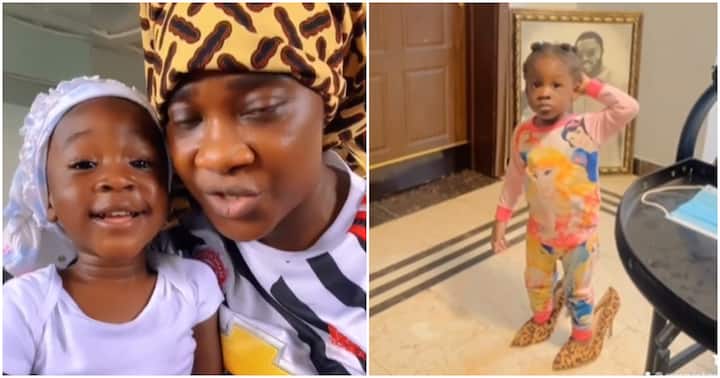 The actress has made it a point to familiarize her kids with the camera since one of them might also be trailing the part of acting in future.

Mercy’s weekly family videos have become a favourite for her fans and followers on social media with many always looking forward to the next post.

Interestingly, being the last born of the family hasn’t stopped her daughter Divine from participating in the videos.

In fact, Divine now has fans of her own because of how entertaining she is when the camera is rolling. Check out some fun videos of the little one below:

Mercy’s lastborn daughter sparked funny reactions after she was seen rocking high heel shoes and confidently walking for the camera.

The video got many people hailing her on social media.

Divine joined her mother to recreate a viral scene from the popular TV series, Jenifa’s Diary.

Creator of the show, Funke Akindele-Bello, couldn’t help but react to the funny recreation by mother and daughter.

Divine joined her mum and siblings for a hilarious TikTok video that went viral on social media.

Just like her older ones, she also rocked their daddy’s large pair of shoes. She’s definitely a team player!

4. Divine chilling in hilarious video with mum and siblings

Another fun video of Mercy’s lastborn captured her chilling as her elder sister, Purity, dealt their mum a slap.

Social media users noticed how Divine appeared unbothered about what was going on.

Divine wasn’t to be left out in an adorable family video that saw their mum rocking her wedding dress from years ago.

The little one joined her older siblings to pull and adjust the lengthy train of the wedding gown.

You won’t see work if you get married: Young lady reveals what her boss told her