Adeleke’s guber victory: God bless you for this – Davido prays for Buhari

Adeleke: Davido Sends Message to Buhari on Uncle’s Guber Victory, David Adeleke, the sensational Nigerian hip-hop icon who goes by the stage name Davido has sent a message to President Muhammadu Buhari on the conduct of the last Osun governorship election. 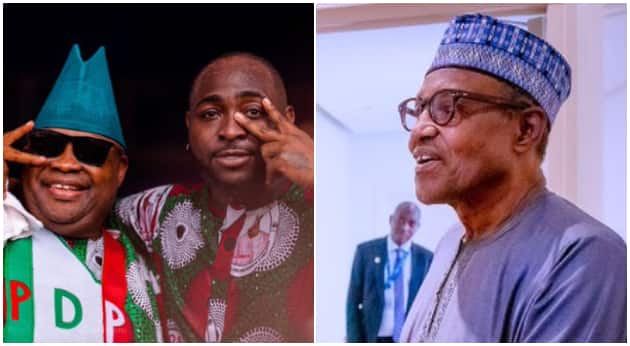 Davido, in a tweet on Sunday, July 17, said President Buhari will indeed leave behind a lasting legacy after his tenure expires in 2023.

The Osun-born musician prayed that God will bless the president for this act of being neutral and fair in the election, which produced his uncle, Ademola Adeleke as the winner.

“You will leave a lasting legacy! God bless you for this act alone sir!”

Davido, by this message, was reacting to Buhari’s earlier tweet in which he said his aim was to leave a legacy of credible and fair elections in Nigeria.

You will leave a LASTING legacy ! God bless you for this act alone sir ! https://t.co/AG2IgtfOSb

Meanwhile, Adeleke had reacted to his victory in the 2022 governorship election in Osun state.

Shortly after he was announced as the winner of the poll by INEC, Adeleke took to his verified Twitter page to send a message to his followers and other Nigerians on the social media platform.

“I have brought light to Osun state,” he tweeted.

“U dey use them play”: Portable rejoices over money from APC, Tinubu and Oyetola