They Are Representing Well: Videos Trend As Davido, Olamide, Other Nigerians Storm Puerto Rico for Afro Nation, Numerous music lovers no doubt had the time of their lives at the recently held Afro Nation concert that took place in Puerto Rico. 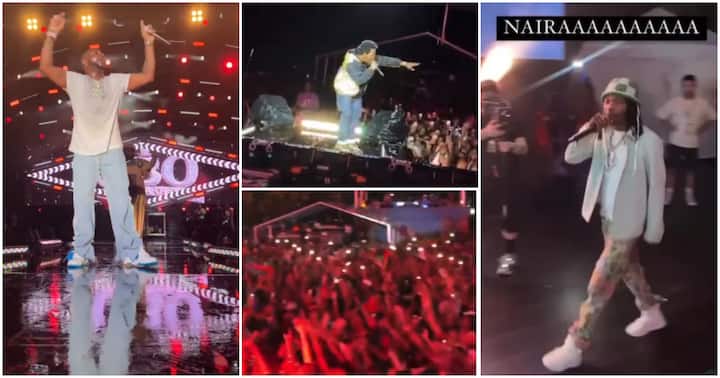 Top Nigerian music stars were also slated to perform at Afro Nation and some of them includes Davido, Olamide, Rema, Naira Marley, Yemi Alade and more.

Videos from these Nigerian stars’ performances made the rounds online as they got the crowd dancing all the way in Puerto Rico.

One of Nigeria’s top singers, Davido, no doubt gave the crowd an unforgettable performance as they all sang along to his music.

The singer was also on stage with his hype man, Special Spesh, as they gave the crowd a good show. See videos below:

Another top Nigerian musician, Naira Marley, had people in the crowd doing the leg work dance after he took to the stage.

In the viral clips posted online, the singer performed his hit tracks, Opotoyi as well as Soapy. The people in the crowd could be heard screaming at the top of their lungs.

This top Nigerian female singer stormed the stage in an Eastern or Southern African attire as she got fans moving with her performance. Her energetic performance had fans singing and dancing along. See below:

YBNL boss, Olamide, was also one of the top stars who represented Nigeria well at the Afro Nation event. The music boss took to the stage and kicked off his performance with his hit song, Shakiti Bobo. He also taught them how to do the dance.

Despite the audience being filled with people from different parts of the world, they all sang along and danced with Olamide. See video below:

Talented Nigerian singer, Rema, also did the country proud after he had Puerto Ricans singing along to his songs. He thrilled fans with some of his hit tracks such as Woman, Lady and Dumebi. The young singer eventually dropped his mic after the crowd impressively sang along to his music.

After videos from the Afro Nation concert in Puerto Rico made the rounds, numerous fans praised the top Nigerian singers who made it a great show. Read some of their comments below:

“Davido no get watin he one prove for the industry again .. his definitely the best and the biggest believe or not.”

“These guys are really making us proud just bad government… may God help us .”

“His album is very good…Rema is lyrically one of the best .”

“Love bro energy man, so underrated by Nigerians but appreciated around the world.”

“I smile and appreciate the hard work of these guys when i see what Afrobeats is doing world wide. Long may afrobeats reign .”

“Baddo no dey too stress himself.”