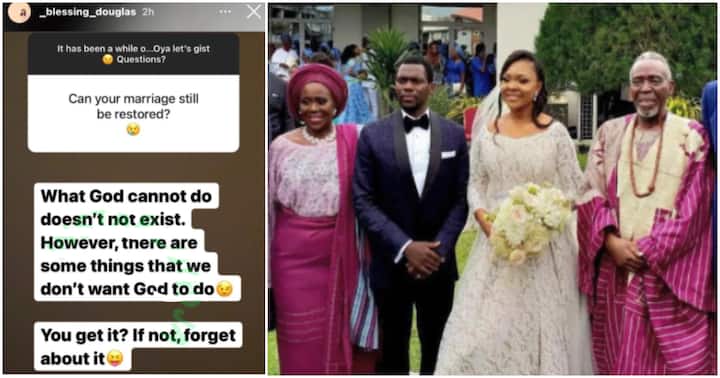 The sad news became public knowledge after Blessing shared it on social media via her Instagram stories.

The mother of one gave fans the opportunity to ask her questions on Instagram and she was asked about the state of her marriage.

Blessing revealed that she is no longer married to Soji. A curious fan who was still in denial, asked the young lady if their marriage could still be restored.

To that Blessing said:

“What God cannot do does not exist. However, there are some things that we don’t want God to do. You get it? If not, forget about it.”

During the question and answer session, Blessing also appeared ready to move on with her life and get the attention of other men.

Recall that the couple got married at a beautiful ceremony in 2018 that had a lot of top stars in attendance. The groom, Soji, even got emotional and shed tears at his wedding.

Blessing and Soji’s crashed marriage raised a lot of comments from Nigerians on the internet. Some people expressed their fears about getting married while others noted that they would not be discouraged from finding love. Read some of their reactions below:

“You guys will stand before God n his church and make empty vows! God is the maker of the entire universe;galaxy;heavens don’t you all get it???”

“Is putting up a speech that you’re no longer married not easier than this joro to joro questions?”

“Wo, report the one that is flourishing abeg.”

“Na real wa. They should create a marriage university already. This is tiring.”

“Me I will marry and stay in my husband’s house period.”

“I don’t care how many people get married before me and it didn’t work for them, when I’m ready to be married, I’ll marry my husband and we’ll have a happy life and marriage.”

“I have suspected this for sometime now.”

“Are you kidding me right now? But they seemed so in love???”