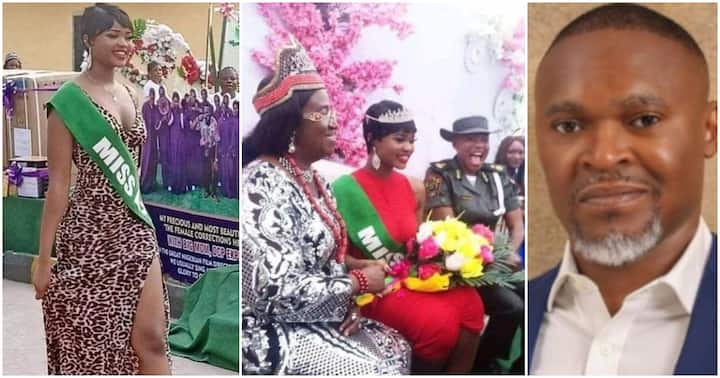 Chidinma participated in a beauty pageant alongside other ladies at the Kirikiri correctional facility.

The event was held to mark the International Women’s Day that took place on March 8, 2022.

Chidinma eventually beat the other ladies to emerge the winner of the pageant and was named Miss Cell 2022.

Photos from the Miss Cell pageant were posted on Facebook by Otunba Sesan Limelite and it showed moments when the ladies performed a choreography and other activities for the pageant.

Limelite accompanied the photos with a caption that reads:

“Chidinma Ojukwu, the alleged killer of Super Tv CEO, Micheal Ataga has been crowned as MISS CELL 2022 at a beauty pageant held within kirikiri correctional facility to mark the 2022 International Women’s Day.”

Internet users react to the pageant in prison

The news of an alleged killer winning a beauty pageant in prison caused quite a buzz on social media with many people condemning it.

Read some comments below:

“I don’t know how I feel about this.”

“So all this beautiful girls are also prisoners???? Haaaaaaaaa.”

“She is already getting very comfortable and doing big things in jail.”

“Hmmm who said wonders will ever end?”

We are getting a divorce: Dancer Korra’s oyinbo husband announces online