American Rapper Rick Ross Storms Lagos in Style, Hangs Out With Kogbagidi, Poco Lee, Other Top Celebs, Popular American rapper, Rick Ross, is set to experience the famous fun life of Lagos after he touched down in Nigeria to mark the Easter celebrations. 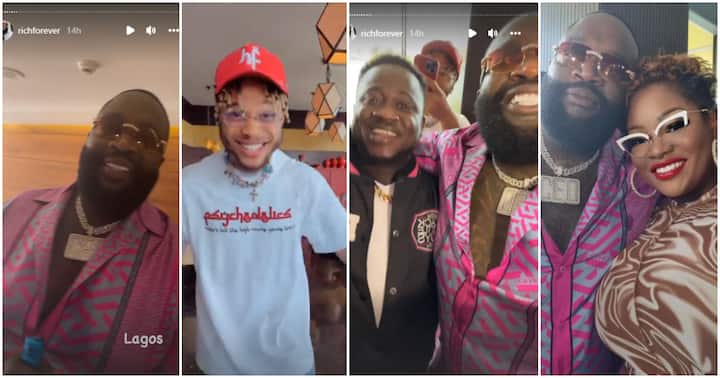 The music star appeared ready to have an enjoyable time and he made sure to capture his experiences in series of posts on social media.

In several photos making the rounds online, Rozay was seen hanging out with numerous Nigerian celebrities and influencers at a meet and greet.

These Nigerian stars showed up in their best as they welcomed the American superstar in their midst.

Some of the stars who were present at the occasion includes Toolz, Kogbagidi, Poco Lee, Beverly Osu, Diadem, Josh 2 Funny, Father DMW, Pretty Mike and more.

Popular skit maker, Josh 2 Funny also left guests at the event rolling with laughter after he told the American rapper how all of his songs have Igbo versions.

Josh then went ahead to sing his Igbo remix of the music star’s songs. Rick Ross was also a good sport and he responded to the comedian by playing along.

See more videos from the meet and greet below:

Numerous Nigerians took to the comment section of videos posted online from the event and they shared their thoughts.

Read some reactions below:

“So because he’s going to see Rick Ross, he wore this jacket in this our hot weather. .”

“So relaxed like someone who has traveled for a long time and just got back to motherland ❤️❤️.”