An Actress I Once Dated Called Me Broke — Actor, Ibrahim Chatta

Popular Nollywood actor, Ibrahim Chattah has opened up on her private life, specifically recounting an experience he had in his previous romantic relationship.

Ibrahim Chattah revealed that she once dated a lady who is also an actress and plies her trade in Nollywood during their relationship the lady mocked him over his financial strength as the lady called him a ‘broke nigga’.

However, the seasoned script-intrepreter did not reveal the name of the actress but I am sure she popular and the people’s favourite.

Sharing a video of himself cruising in his car whilst jamming to a song, he captioned;

Sometimes ago a lady I dated in my industry called me a “broke nigga” Olohun Jo fun gbogbo wa l’owo ooo. I luv y’All 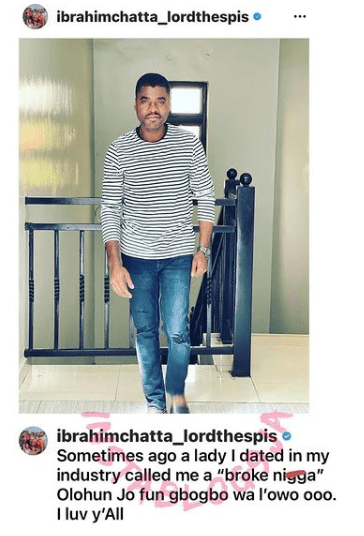 Wetin concern us inside? We have all been broke at one point or the other. Abi you nor broke that time?

Bros are you rich now let’s no where to start from. The country is already hard now pls don’t stress us.

God go shame her, you’ll be blessed with abundance of wealth under her nose.

BROKENNESS IS A REALISTIC SITUATION, DONT FEEL BAD. I HOPE YOU HAVE RESURRECTED?