Money Gang: Up-Close Look at Singer Wizkid’s Jesus-Themed Pendants Worth Over N330 Million, Fans Surprised, Singer Davido has a reputation for acquiring expensive jewellery pieces and flaunting them on social media but it appears his colleague, Wizkid, also has the same taste for diamond-studded accessories. 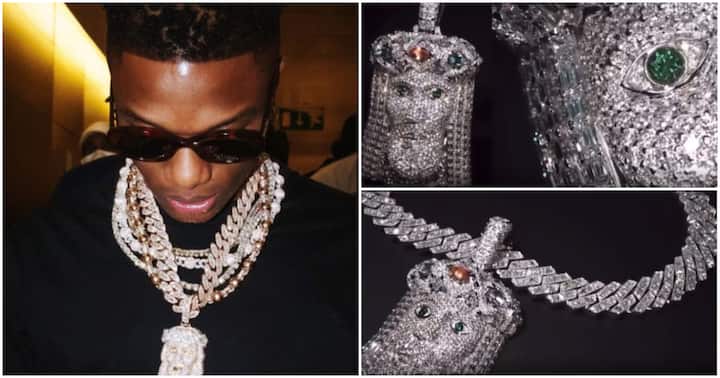 The Made in Lagos (MIL) crooner became a topic of discussion on social media after a video from his official jeweller surfaced online.

The individual, A-Jeweller, gave an appraisal of some of Wizkid’s luxury purchases while noting that the singer spends hard in a bid to celebrate his huge successes.

A-Jeweller displayed Wizkid’s Jesus-themed diamond-studded pendant and disclosed that it is a 60-carats piece.

The pendant comes along with another heavily studded Cuban necklace piece and both cost as much as £300,000 (Over N166 million).

Wizkid reportedly has about two designs of the neck-pieces which bring the cost to a total of over N330 million.

Watch the video as seen online below:

“I learn a lot from wizkid no be everything u go post for social media.”

“And he never shout or say anything about it, hmmm this guy maturity needs to be study in school.”

“My chairman starboy wear davido rolls Royce for neck. Chooiii. I talk am, wetin satan do no good.”