Annie Idibia Made Me Her Slave: Actress’ Brother Accuses Her of Not Giving Him a Car, and More in Messy Video, Popular Nigerian actress, Annie Idibia, has once again fallen out with another of her family member after her eldest brother, Wisdom, called her out on social media. 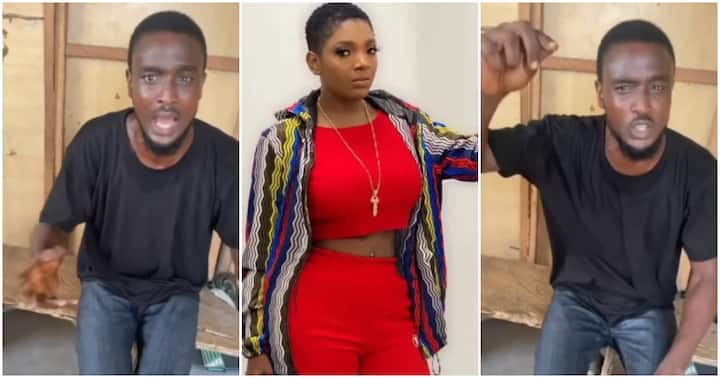 In a troubling video making the rounds online, Wisdom noted that his life is being threatened by his sister even though he has been working for her for some time.

Wisdom claimed that Annie has never paid him his dues but would rather send him stipends and when she is angry, she can decide to withdraw her help.

The disturbed young man noted that Annie’s husband, 2baba, recently gave him a little money after he had been begging for years and that he used it to settle his home because he has a wife. Wisdom then apologised to Imo state for not yet paying his wife’s dowry. According to him, it wasn’t his wish not to pay, but he has been manipulated for years.

Annie introduced me to hard dru*gs

Also in the over five minutes video, Wisdom revealed that Annie introduced him to hard substances and she is an addict. He added that she is very violent and doesn’t have peace with anybody.

The young man accused Annie of taking everything away from him after he wasn’t around for two weeks. According to him, the actress took away his job and would not give him a car to use as a taxi.

Wisdom added that Annie also refused to employ him as her manager but turned him into a slave instead.

“She decided to take everything away from me. She took away the job, she wouldn’t give me a car. I’ve been begging my sister for a car to do Uber for many years now so I can at least on my own provide for my family, provide for my wife and my three children, my sister has never responded to me. I came back to beg her to continue with the manager job that she offered me but at the end of the day she turned me to an errand boy, she turned me to a slave and doesnt want me to stand on my own.”

According to Wisdom, Annie introduced him to cr*ack and he was never like this. He explained that the use of substances later got to him and then his sister took away his only means of livelihood.

Wisdom added that when he was sent out of Annie’s house, he took one of the cars with the intention of becoming an Uber driver but she sent her driver and some boys with knives to retrieve the vehicle and he had to run for his life out of fear.

“The moment that she realised that her husband gave me small money, she blocked every means of communication with me and set me up to lose the only way I can feed my children.”

Wisdom then begged Nigerians for help and noted that he just wants to be able to stand on his own.

Wisdom’s video about his sister, Annie, stirred a lot of reactions. A number of people accused the young man of being entitled while others sympathised with him. Read some of the comments below:

“Blood family, that’s something we get dealt. Sometimes we get a good hand and sometimes a bad hand. There isn’t so much around it. One just has to grow up and get more family. The kind you get to pick yourself. #NewLevelEntitlementUnlocked.”

“The entitlement in his words irks me tbh!!”

“Imagine the sense of entitlement….. And with 3 kids.”

“Very typical of addict when you refuse to aid them.”

“U no get shame na woman dey give u money.”

“Na bad influence make this guy do this video.”

“What kind of family is this one.”

“For your younger sis to be able to use you, you must have actually been a useless elder brother.”