Popular Nigerian socialite and businessman, Cubana Chiefpriest, has once again taken to social media to show off his wealth. 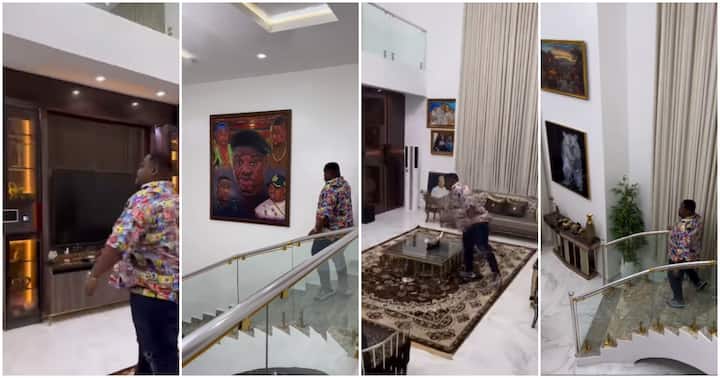 In a new post shared on his official Instagram page, the self-styled celebrity barman was seen showcasing his mansion.

Chiefpriest, whose house is based in Owerri, was seen walking around the property as he was being filmed while showcasing its splendor.

The socialite started at the top of the stairs and a number of huge paintings of him were seen hanging on the white walls. Expensive grey curtains were also seen around the house.

Not stopping there, Chiefpriest got to the bottom of the stairs and showed his beautiful living room with expensive gadgets. His plush chairs, mini bar and more were also sighted before the socialite stepped out into the compound to show off his cars.

Online users were no doubt awestruck by the beautiful display and they had a lot to say.

Read some of their reactions below:

“Who go wash those curtains o.”

“Repeat after me….I will never be poor in my life….This money,I will have it too…Amen.❤️.”