Bold Nigerian Boy Leaves Pretty Foreign Actress Blushing Hard as He Sings Sweetly for Her on Street in Video, South African actress Sithembile Xola Pearl Thusi was stunned by the action of a little boy when she visited Nigeria and shared it on her Instagram page. 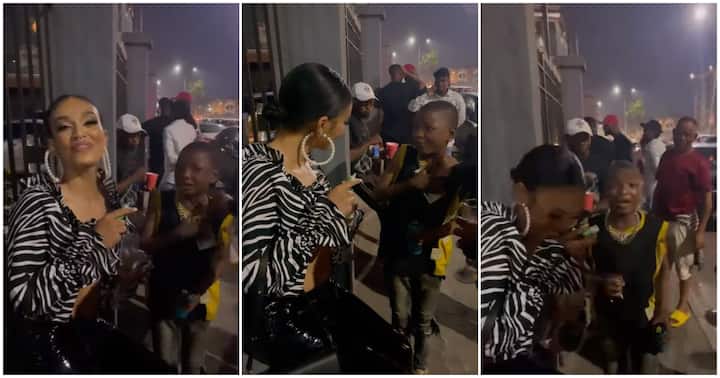 The 34-year-old model and presenter was approached by a little boy who offered to sing her a song.

She consented and the lad delivered as he hailed her physical beauty in a rap.

The lad’s performance earned him cash

The lad’s bold performance left the beautiful lady blushing hard and stunned folks around them.

At one point in the video Pearl shared, the lad went on to sing for a man who had accompanied her as well as the video recorder.

His daring showcase inspired the man with Pearl identified as Swanky to spray the lad money.

According to Pearl, such a display is a common thing she experiences every now and then.

She captioned the video:

“He asked if he could sing for me.

“This happens so often to me around the world and I’m never disappointed for saying yes.”

Watch the cute video below:

“It’s the grabbing of the money for me.”

“It’s swanky showering him with paper money for me!”

“One thing about you a kid is gonna sing for you for sure.”

“Love him…. On his grind but catching the bar!”

“Awww can’t get any sweeter than this.”

Little girl dances, her mother, grandma and great-grandma all join her in video