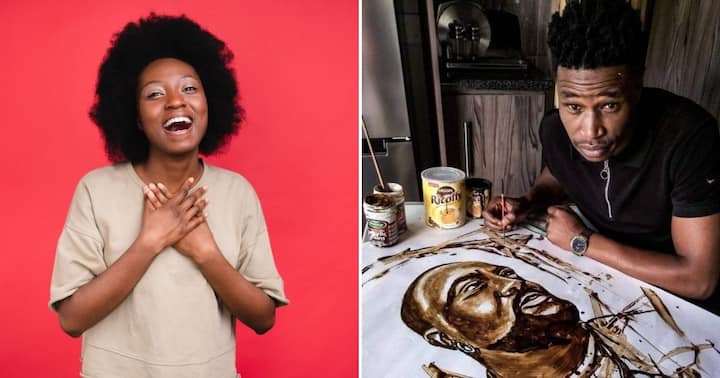 In a Twitter post, Ennock can be seen with the creative artwork of the legendary Kwaito musician made with various shades of brown and neutral tones on a white canvas.

we previously reported that there are calls for Mzansi celebs to step up and lend a helping hand to legendary Kwaito musician Zola 7, whose health and financial struggles have become a notable talking point in social circles of late.

Related media reports revealed that online users were left concerned after images showing the celeb’s current state. He has been a trending topic recently after director at The Orchard, Nota Baloyi made irresponsible claims that Zola was “not looking good”.

Zola has touched many lives through his music and reality TV show where he helped South Africans through their problems and realise their dreams. Ennock managed to capture this beautifully on canvas.

“Now sell the picture and give the proceed to the man himself. Nice picture.”

“Ricoffy must pay Zola and you also draw one to give him for free.”

“Ricoffy must do what? For who and why? Stop telling people what to do.”

“Hope someone buys it for more than R100k and I hope you give Zola some of the proceeds, but ey man entle blind, your work is too good.”

“Don’t believe the word they say, turn around and walk away, listen to your daddy – LWANDLE BY ZOLA 7. Thank you Goodman.”

‘Big Brother Mzansi’: Fans beg for votes to save Mpho from the chopping block

It ended in tears: Thatho Rampedi and Mo announce split after 3 years of dating