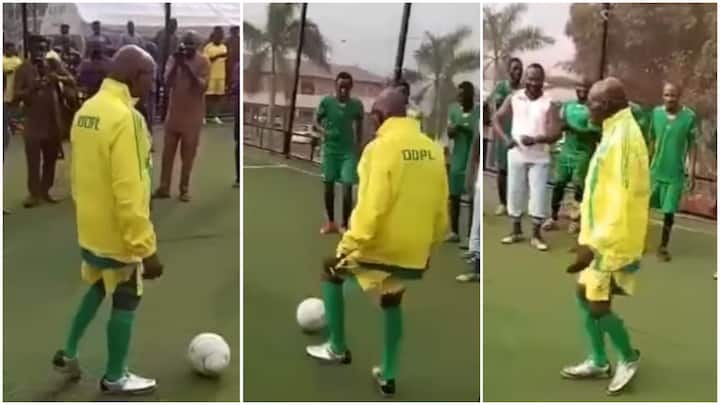 According to Channels TV, the event was part of activities marking his 85th birthday celebration.

we gathers that the novelty match drew the presence of the 91-year-old President of Benin Republic Nicephore Soglo, a former minister of justice and attorney general of the federation, Chief Bayo Ojo, among others sports enthusiasts.

Obasanjo who captained his team displayed his dexterity in football as his team defeated the Ogun state government team led by the deputy governor, Noimot Salako Oyedele, by four goals to two, with the former president doing the goals.

He attributed his agility to the grace of God as he recommended physical exercise, medical examination, good dieting, and social interaction for the elderly to keep them healthy.

Sharing a video of the former president playing with the ball on the field, former Kogi West senator, Dino Melaye, wrote on Instagram:

“Brand new, much sought after £100million striker unveiled for Arsenal and Super Eagles!”

“Is he the new Arsenal player we bought yesterday? Am just asking respectfully.”

“I just love Baba Obasanjo.. He is a man who has found Special Grace from God.”

“Baba Obasanjo.. if you enter Oopl you jam baba .. the way baba go greet you .. You go think say baba dey work for there.”