10-Year-Old Black Boy Battling Brain Cancer Sworn into the FBI, becomes Youngest Member of the SWAT Team, DJ Daniel, a young black boy in the United States, has become the youngest member of the Federal Bureau of Investigation (FBI) after being recently sworn in. 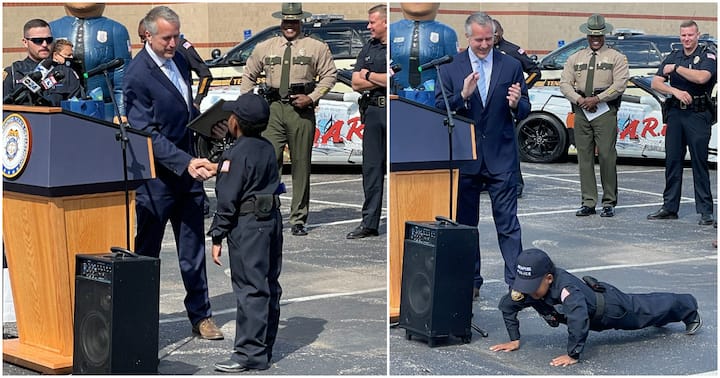 Making the announcement on social media platform LinkedIn, Bryan McCloskey, an assistant special agent in charge at FBI, said it is an absolute honour for him to have sworn in the lad.

Bryan added that the 10-year-old also became the youngest member of the Special Weapons and Tactics (SWAT) team after doing push-ups.

According to Bryan, Daniel desires to be part of as many law enforcement agencies as possible and it is fast becoming a reality for the lad with terminal brain and spinal cancer.

“I had the absolute honor today of swearing in 10yo, DJ Daniel, into our FBI family this morning. After doing pushups he also became the youngest member of our SWAT team.

“DJ is fighting a terminal brain and spinal cancer. His strength and resiliency is only surpassed by his loving and larger than life personality. His wish is to be sworn in by as many law enforcement agencies as he can.”

In one of the frames Bryan shared, Daniel dressed in the FBI uniform is seen doing push-ups, much to the admiration of law enforcement agents around.

“Bryan McCloskey: Mad respect! Be proud and be blessed of the fact that you have the power to create this inspiring effort. I am always left astounded at the level of sincerity a true leader like you put in this kind of noble cause. So glad you are one of us. May you reach every height of success!”

“Tremendous inspiration! That is one special young man! Welcome to the FBI family, DJ! I hope you see these posts filled with love and encouragement to keep pursuing your wish!!”

“He is a fighter, he will beat cancer, I have seen or heard over and over , the human spirit beat the most impossible of situations. This will be one of those instances. God be with him.”

“Welcome to the FBI, DJ Daniel, and you are as courageous as they come. May God Bless you, your family, and all your new Law Enforcement families.”

A blessing to this generation – Fireboy celebrates Olamide on 33rd birthday