I Will Sell My Bike for N10m: London To Lagos Biker Places His Eagle on Sale, Says Money Will Be for Charity, Eagle, the bike being used by London to Lagos biker, Kunle Adeyanju will be placed on sale as soon as the adventurer arrives in Lagos. 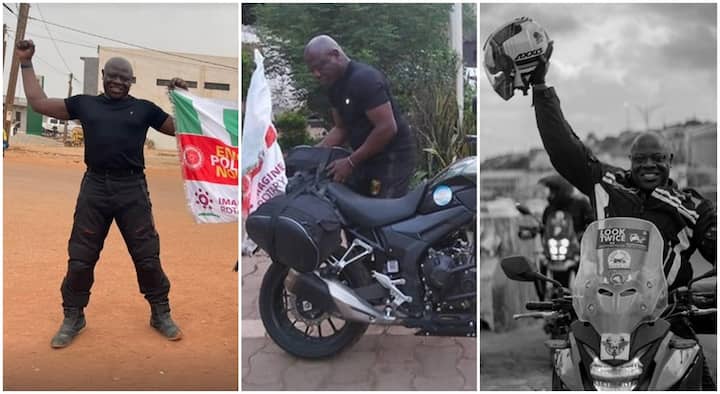 According to a tweet shared by the biker, the bike will be going for $25,000, an equivalent of N10m.

Part of money will go to charity

He intimated in his now-viral tweet that part of the proceeds will be donated to charity and used to end Polio.

“Eagle will be going on auction post-arrival in Lagos…… starting bid $25,000. Part of the proceeds will be donated to Rotary Foundation toward ending polio.”

Kunle commenced his popular charity journey on the 19th of April and he is currently in Ghana.

Eagle will be going on auction post arrival in Lagos…… starting bid $25,000

“Wishing you a safe arrival to Nigeria. Have been following up on your trip from day one. Wish I could be available to welcome you but all the same Congrats and have a wonderful trip ahead.”

“@Honda A worthy cause was accomplished and promoted by a good-spirited individual with the aim of ending polio with one of your bikes. Kindly, make him your ambassador and donate to this course. Thanks.”

“Eagle should be preserved. The Nigerian government should work with @lionheart1759.”

“Nice one @lionheart1759. The shirt worn by Diego Maradona when he scored the controversial “Hand of God” goal against England in the 1986 World Cup has sold for 7.1 million pounds ($9.3 million).”