Will They Fight? Massive Reactions as Bride & Groom Enter Wedding Reception With Boxing Gloves in Video, A video shared by Tunde Ednut has shown the moment a couple who were about to get married arrived at their wedding venue in an uncommon way. 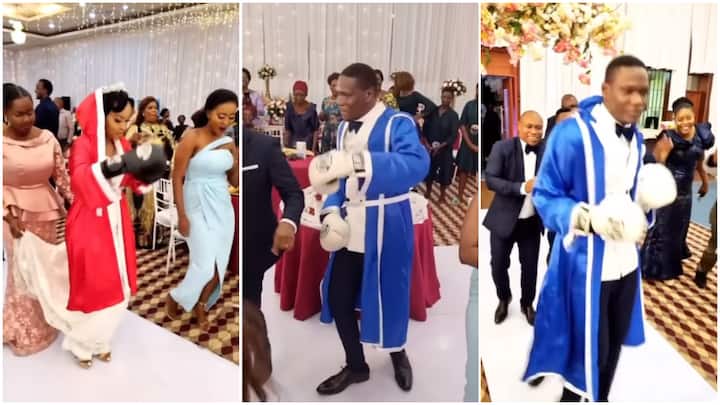 The bride was the first person to come in as she wore a boxer’s gloves. Her bridesmaids were behind her as members of her team.

Like an athlete ready for a fight would do, the lady threw punches with her wedding guests watching.

The husband was also no spoilsport as he jogged into the venue and went up the aisle like a ready sportsman.

As at the time of writing this report, the video has stirred over 2,600 comments with more than 23,000 likes.

“They are ready to box out anything that will hinder their marriage.”

“This one una box everywhere start marriage life so , we nor one hear say Justice for the groom or bride oh.”

“Your marriage will not be a boxing ring IJN.”

“It symbolizes fighting life’s challenges together, fighting anything that will come their way together. Blessed union to them.”