Buju’s Dad Throws Hands in the Air Like a Happy Kid As Singer Gifts Him Car for Birthday, Video Melts Hearts, Nigerian music star Buju who now goes by the name Bnxn went the extra mile in making his father happy on the occasion of his birthday. 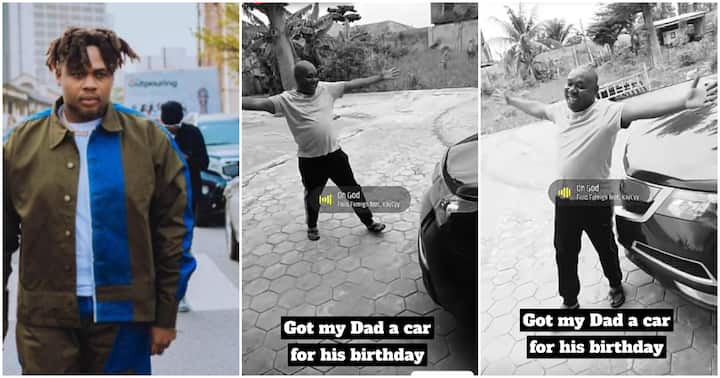 The singer took to his Snapchat channel with an update where he announced to the world that he gifted his father a car to celebrate his birthday.

Bnxn posted an adorable video that captured the moment his dad came out of the house to see the nice car that was already parked in the compound.

The excited celebrant threw his hands into the air as he admired the new whip and made an attempt to strike a pose with it.

Watch the sweet video below:

“Wow! I tap into this blessing o. I’ll buy my mama a car soonest.”

“Congratulations old boy , God give me the grace I go run am dis year for my dad.”

“Awww may we make our parents happy one day. Amen .”

“Happy birthday to him. These people deserves these gifts. ❤️.”

“Wow ❤️…… love this congratulations to ur dad.”

“Congratulations to both of them but he should’ve buy Toyota highlander instead of this, to avoid unnecessary issues/repairs.”

“Congratulations……GOD give me the strength to surprise my mum.”

Almost moved to tears, Yousef says as fans sponsor his trip to hajj for birthday