E Dey Body: Fans Gush As Burna Boy’s Mum Dances Like a Rockstar on Stage During Son’s Performance in Ireland, Top Nigerian singer Burna Boy’s mother, Bose Ogulu, has once again earned the admiration of fans over the tremendous support she shows her son. 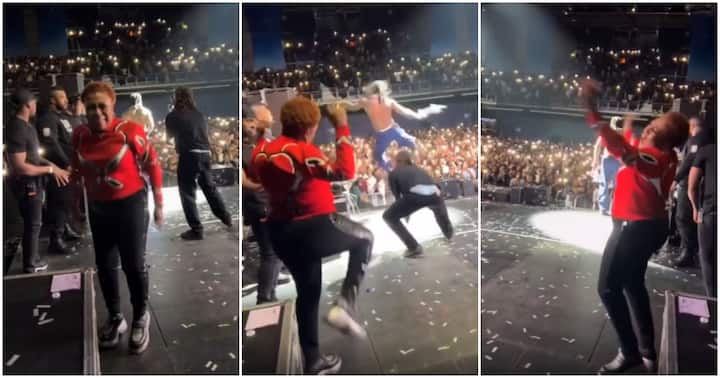 It is not strange to see Mama Burna dancing on stage whenever her son performs but this time around, she took things up a notch.

Just recently, while Burna Boy was performing at an event in Ireland, his mother was also seen on stage dancing energetically.

Bose rocked a red sweater and black leather pants with sneakers as she moved energetically on stage to her son’s performance.

Her dance moves impressed many seeing as she is not a young woman but was able to move powerfully. Bose’s dancing was also captured on video and it went viral on social media.

Burna Boy’s mother’s dance moves on stage has earned her a fresh round of admiration from Nigerians who took to social media to praise her. Many of them gushed over the support she continues to show her son.

“No mother supports his son the way burna mom supports him and am super proud of then both ❤️ big love for you always and forever #Burna.”

“I love the way the mom is always there! Asides her being his manager she’s his number one fan.”

“Mothers are the greatest. Their loyalty is unquestionable.”

“In all honesty no one performs like him in Nigeria. for me he’s better on stage than anyone else right now.”