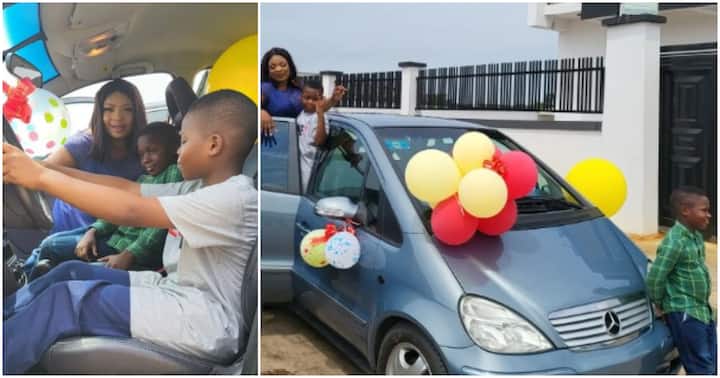 The actress revealed the new car was a birthday gift from her daughter to her son as he celebrated his 9th birthday.

According to Laide, Simi had asked her to purchase her brother a car with her (Simi’s) allowance.

Sharing photos and video of the car via her Instagram page, the actress wrote:

“From a 13-year-old Simi To her nine-year-old brother, Dammy. I’m Blessed indeed Aliamdulilai for everything LOVE lives in my house, i dont hunt for it anymore.”

Many Nigerians have since taken to social media to react to the post, while some applauded her, others dragged the actress as they claimed she was teaching the kids to live fake lives.

“Una lie they carry us go where we nor know oh, abeg make una help us .”

“Una be Real delegates of the season.”

“Be like this woman dey low-key compete with somebody o. Cos this show off lately no be am abeg.”

Nigerian man who left home for 6yrs to serve in US Army returns, gets family emotional in video

Money jam money: DaBaby welcomes Davido to the US with exotic cars amid fanfare