DaBaby, Rick Ross and 4 Other International Celebrities Who Have Stormed Nigeria So Far in 2022

Nigeria is no doubt enjoying a lot of great PR in recent times, mostly owing to the entertainment industry and actions of the youths in the country. 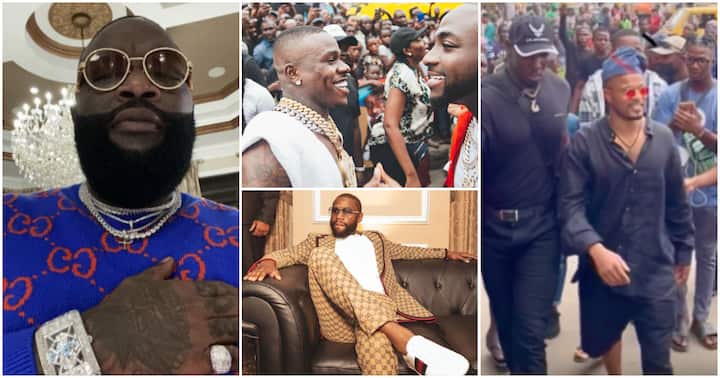 Despite the numerous downsides to the country, a number of international stars have continued to show their great interest in associating with Nigeria and that does not seem likely to stop soon.

In 2022, a number of top international celebrities from different fields made sure to grace the country with their presence for numerous reasons and Legit.ng has gathered a list of them.

Popular American rapper and businessman, Rick Ross, was recently in Nigeria as he headlined different shows to mark the Easter celebration. The music star’s visit in the country caused quite a stir especially after Nigerian artiste, MI, claimed rappers from the country were not rated highly considering that they weren’t given special access to the international star.

Rick Ross stayed for a few days in Nigeria and he was in two major cities, Lagos and Abuja. His shows were also a great success.

This American rapper’s presence in Nigeria came unexpectedly and only top singer, Davido, appeared to be aware of his visit. Soon after DaBaby landed in Lagos, he enjoyed the fun and nightlife in the city as he cruised with Davido. The international star even made headlines with his generosity as he was known to give out $100 bills or more to people.

DaBaby’s bodyguard also seemed to enjoy the country and he was spotted collecting phone number from a babe in Lagos Island during a video shoot.

This American reality show star visited Nigeria to pay a surprise to her Edo-state boo, Simon Guobadia. Simon had no idea Porsha was coming and she planned the surprise with one of her friends. The sweet video went viral on social media.

The reality show star stayed in the country for several days and was treated to yummy Nigerian foods, Nigerian traditional outfits and more. The celebrity couple hung out mostly with Davido and his crew members.

American boxing champion, Floyd Mayweather, recently visited Nigeria and he was hosted by top politicians. The international star reportedly came to the country on a talent hunt mission.

His visit however caused a stir after veteran singer Daddy Showkey blasted his hosts for not involving Nigerian boxers in Mayweather’s visit to the country.

The former Manchester United player visited Nigeria and made sure to go to an unexpected location, Oshodi Underbridge, as he played chess with young talented players. They appeared to have a great game and the legendary footballer shared videos from his visit on his social media pages.

This British rapper of Nigerian descent was more than excited to visit his motherland in April 2022. Tion Wayne visited his grandfather’s home, mixed with the residents and generally had a great time. Photos and videos from his Nigerian visit made the rounds online.