Daddy Loves You: Nigerian Dad Cries Hard in Video at Daughter’s Church Wedding as She is Given Out in Marriage, A man’s love for his daughter has been much expressed the moment he was seen crying in a video while his daughter’s wedding was going on in the church. 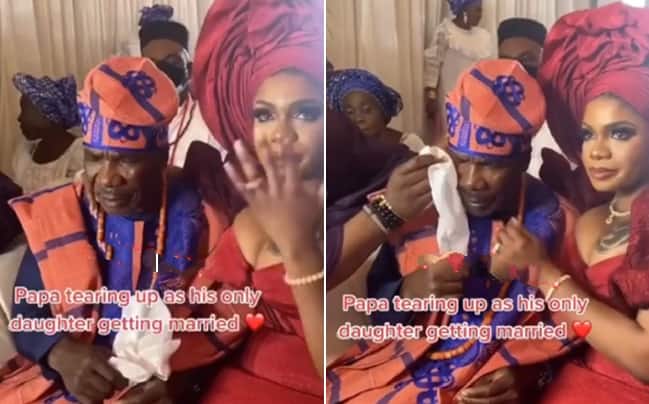 The man used a white handkerchief to clean his tears, as he could not control his emotions which poured out of joy.

His only daughter gets married, he cries out of joy

Many people who have seen the video have interpreted it to mean that the man loves his daughter so much and was happy she was getting married.

Some others however said the man was thinking of the fact that the girl was his only daughter and he would miss her at home.

Meanwhile, the video has attracted mixed reactions from Nigerians who have seen it where it was posted on Instagram by @instablog9ja. Here are some of the reactions:

“Tears of joy. Daddy’s daughter. Some fathers don’t joke with their daughters tho. Congratulations to her.”

“Definitely a daddy’s girl. She must have been an awesome daughter.”

“Something my husband can do when his daughter is getting married.”

“If na me I for don ruin my makeup with tears.”

All of us will die – Boy weeps in video, fears Russia will send bombs to Nigeria