Billionaire Pikin: Davido Hails His Son Ifeanyi in Trending Video, Little Boy Looks On, Runs Away in Confusion, Popular Nigerian singer, Davido, has started to let his only son, Ifeanyi, know that he is the son of a billionaire. 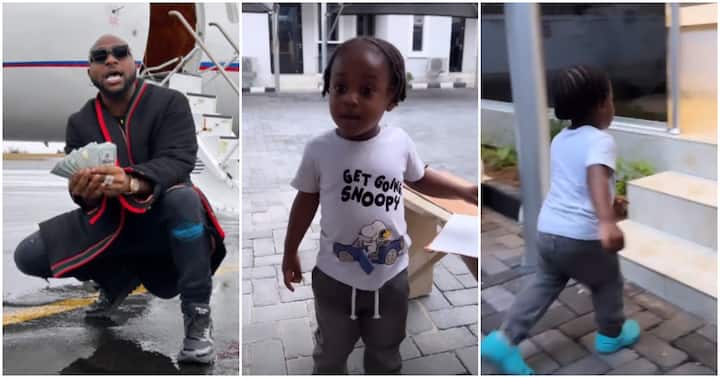 This was made obvious in series of videos that was posted on social media on the singer’s Instagram stories.

In the clips, Ifeanyi was seen stepping outside the main house when Davido pointed his camera at him and started to gush over his beauty.

The music star was heard saying:

Davido’s comments soon caught Ifeanyi’s attention and the little boy walked to where his father was sitting with some of his guys.

The singer and other onlookers then started to hail Ifeanyi and call him the son of a billionaire.

Ifeanyi was called a ‘billionaire pikin’ and a ‘billion dollar baby’.

Not stopping there, Davido proceeded to calling Ifeanyi himself a billionaire.

“Billionaire! Your papa get money.”

The little boy looked very confused at all the attention and noise he was getting that he ran back inside the house.

“The young dude quickly ran off because he couldn’t figured out why the other unku is shouting….. ” e soak* .”

“Looks like his sister. His voice scared the boy.”

Video of Regina Daniels and Mike Ezuruonye playing as couple