Davido Makes Grand Entry in a Huge Cage at O2 Arena Concert, Isreal DMW Opens the Show With Chants, Rings Bell, Nigerian singer David Adeleke aka Davido is currently being praised on social media after putting up a spectacular show at his much-anticipated O2 Arena concert. 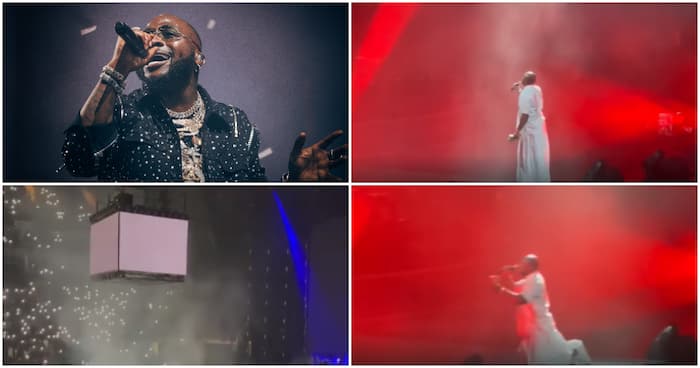 The sold-out concert went down on Saturday, March 5, and thousands of Nigerians in diaspora among other UK citizens trooped to the arena to watch the 30BG crooner in action.

The night had a lot of side attractions but fans couldn’t shake off the exhilarating feeling from watching the singer make a grand entrance on stage.

Davido was in a square-shaped LCD stage that had psychedelic displays before finally revealing him in his full Dolce and Gabbana outfit.

The singer kicked off the show with his 2016 hit song, Skelewu.

Recall that some weeks ago We reported that Davido shared a conversation with his aide, Isreal DMW, who had begged to open his O2 Arena show.

Isreal had also sent a video of his rehearsal to the singer showing how he intends to usher him to the stage.

Well, the controversial aide got his shine for the night as he had the rare opportunity of opening the show.

Isreal donned a white outfit and made several chants dedicated to his boss. He equally had a bell at hand which was rung at intervals.

“You just gotta love OBO ❤️❤️❤️ wow this it for me. Awesome.”

“@davido is the best human anyone should identify with, he wants everyone around him to be happy, live their life and have fun. I just love this and love Davido more.”

“Best thing you will see today.”

“Israel DMW don perform for O2 before some artist. This life no balance.”