6 Nigerian Celebrities That Were Dragged On Social Media Over Wizkid’s Grammy Loss, One of the events that wouldn’t be forgotten in a hurry in Nigeria in 2022 is the 64th edition of the Grammy Awards, which took place in Las Vegas. 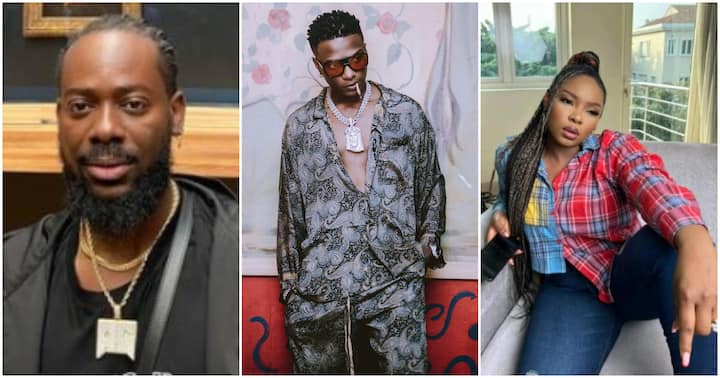 Wizkid’s failure to win sparked dramas on the Nigerian social media space that saw some music stars being dragged.

This article is focused on the Nigerian celebrities that were dragged because of Wizkid’s Grammy loss.

This wouldn’t surprise many people, considering the rivalry between the two music stars and their fans.

On the night of Wizkid’s Grammy loss, Davido shared a video of him alongside a chef slicing onions at a restaurant in Dubai which didn’t sit down well with many Nigerians.

Even though the singer innocently posted the video, many couldn’t help but point out that it was shared on the same night Wizkid lost his two nominated categories at the prestigious award.

Simi is another singer who was dragged following Wizkid’s Grammy loss. She took to social media to explain herself after a Twitter user identified as @mikeoriv called her out over her congratulatory tweet to Burna Boy and Wizkid.

In an earlier tweet, Simi put up a congratulatory tweet where she used Davido’s trending slang ‘E choke’ while congratulating Wizkid and Burna Boy; however, many perceived it as an indirect shade at the DMW boss.

AG Baby was dragged due to his wife Simi’s action after she congratulated Wizkid and Burna Boy.

A fan, while reacting, said Davido gave Adekunle the biggest hit after he featured in his song High. AG Baby was dragged with many making a joke out of his real name Fatai.

This is why Nigerian celebs run away from Twitter,

They don't know what they'll tweet that will lead to them being dragged.

Wizkid’s aide Godson sparked drama with his statement on social media where he boldly slammed Yemi after Wizkid sold out his Paris show in one minute despite his Grammy loss.

Yemi was dragged because she contributed to Angelique Kidjo’s album, which defeated Wizkid’s Made In Lagos album in the Best Global album category.

Wizkid’s babymama and manager Jada P was equally dragged over Wizkid’s failure to win a Grammy this year.

This comes after Jada expressed dissatisfaction about Wizkid not winning any of the two categories he was nominated for. Jada took to her Twitter page to rant about the successes of Wizkid’s Essence as she called the Grammys a committee full of opinions.

Nigerian rapper MI Abaga had his own share as well even though he didn’t make mention of Wizkid.

The rapper sparked reactions on social media after he revealed his dream to win a Grammy with his next album. However, some Nigerians claimed since Wizkid couldn’t win, MI couldn’t win as well.