Davido’s Ifeanyi Gets Fed Up As Ice-Cream Man Plays Games With Him, Walks Away in Frustration in Funny Video, Popular Nigerian singer, Davido’s son, Ifeanyi, is currently on vacation with his mother, Chioma, in Dubai, and they are having the time of their lives. 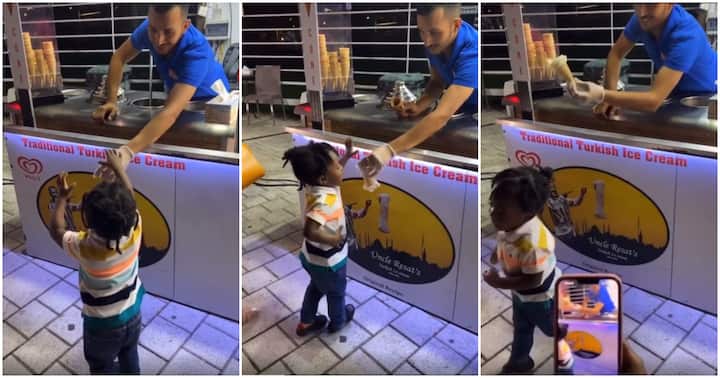 However, Ifeanyi did not seem to enjoy it much after he was the victim of the games street ice-cream sellers are known to play in Dubai.

In a video posted on Chioma’s Instagram story, Ifeanyi was seen struggling to get a cone of ice cream from the vendor who continued to frustrate him.

In line with their usual games, the vendor continued to shift the cone away despite Ifeanyi’s many attempts to grab his ice cream.

At one point, the little boy walked away with just the cone and no ice cream till one of the onlookers led him back to the stall. Ifeanyi tried again but was not able to secure his treat so he walked away in frustration, leaving his mother and other friends rolling in laughter.

See the funny video below:

Ifeanyi’s struggles with the ice-cream man soon became a trending video on social media and a lot of people were amused. Read some of their comments below:

“He use am resemble his daddy.”

“Why you Dey stress the boy life.”

“Make he no bring OBO hot temper change am for you o…no dey stress our boy o.”

“Shey na billionaire son u dey dribble like that or u won collect.”

“He suppose hold the hand con bite am.”