Destiny James: Lady Who Received N20.7m Scholarship From Drake in 2018 Celebrates Her Big Wins After 4 Years, In 2018, a young Miami student, Destiny Paris James, got a $50,000 scholarship from Canadian rapper, Drake, and was also featured in his God’s Plan music video. 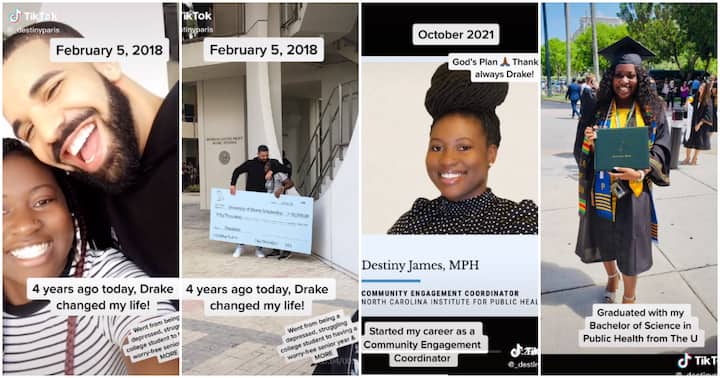 Since then, Destiny’s life took a great turn and she went from a very low point to a high point after bagging several wins.

Now, four years later, the young lady has taken to social media to celebrate her wins as she noted how much the scholarship from the rapper changed her life.

Taking to her social media pages, Destiny shared a video compiling the moments when her turnaround started after getting the scholarship.

From depressed to worry-free

According to her, she went from being a depressed and struggling college student to having a worry-free school year.

She added that it was God’s plan as she thanked Drake.

“4 years later… I’ve done just what I said would do & then some. I am so proud of myself. I am so grateful for FAVOR!

“Every drake in my life will start to locate me in Jesus namefire God’s plan.”

“If I’m drake seeing this now I’ll surely invite her over just for talk.”

“But in Nigeria here give them money they will eat it finish will now come to social media and tell the public the celebrity did not do enough for them ..”

“She try pass ❤️“some go take buy bone straight or something else.”

Sharon Ooja, Beverly Naya, Other Nollywood Actresses Whose Fans Are Eager to Know Their Partners

I Said No to Marriage, Travelled to Canada for My PhD Instead: Nigerian Woman Shares Story, Stirs Reactions