Devil is a liar: JJC Skillz and Funke Akindele shut down breakup rumours 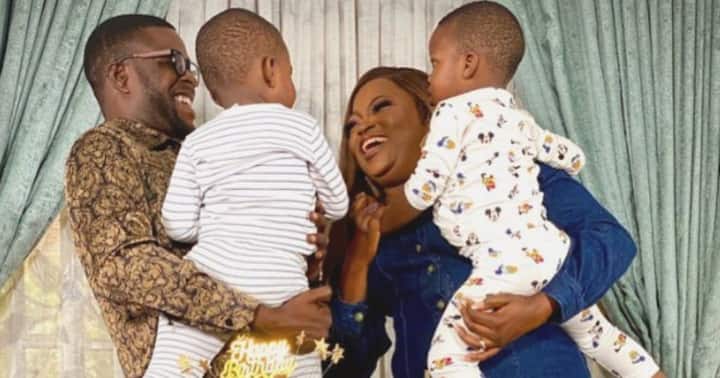 News recently made the rounds that the couple might have been facing hard times and it caused a buzz online.

In reaction to the news, JJC has now taken to his official Instagram page to show that all is well with his family.

The filmmaker posted a photo of himself with Funke and their twin sons and accompanied it with a loved up caption.

He praised his union and noted that family is the only institution that works. JJC also added that despite him being in London at the moment, he misses home.

He then told his wife Funke to have loads of fun with the children because he would see them soon.

I know that works is the FAMILY. London is cool but I’m missing home @funkejenifaakindele my love Have loads of fun with the children. See you soon at home. Don’t let anyone spoil your vibes #familyfirst❤️ #Bellos4ever #chinesswhispers #devilisaliar.”

The popular Nollywood actress also reacted to her husband’s post by calling him darling and saying that she and the kids missed him too.

Read some comments from fans to the development below:

“My faves God will continue being with the family❤️❤️.”

Man raises money for woman, buys her house, furnishes it & opens shop for her