Give Me N1m to Help My Business: Physically Challenged Man With Football Viewing Centre Begs Davido on Twitter, Davido has been trending on social media and like most times, it is for his kindness. Days ago, the musician said he will be giving out N20 million to 20 Nigerians who have business ideas as a way to help them in the present harsh economic reality. 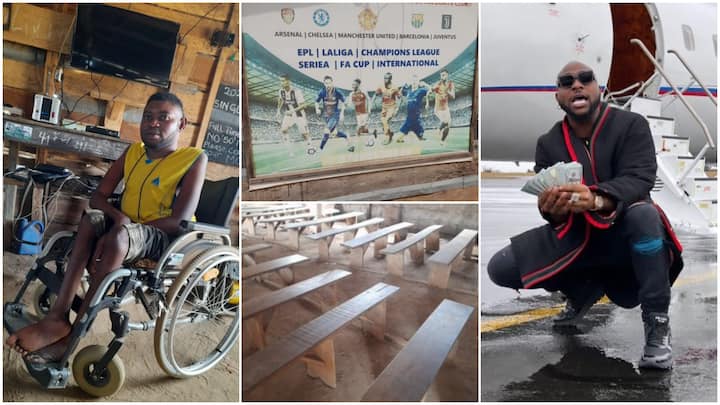 While many have been pitching their businesses and some begging outrightly in his comment section, a young physically challenged man, Adebisi Micheal, got people’s attention with how the N1m would help his business if he is given.

N1m will do a lot for my business

Quoting Davido’s earlier tweet, Adebisi shared photos of the viewing centre he is running which he started two months ago.

He revealed that because he had just a TV, a stabiliser, and a small generator, he can only screen just a match at a time. If he ever gets the N1 million giveaway, he said it would help him to replace his faulty generator, add more TV sets, a UPS, and a fan.

He shared photos of the items he wants for his business urgently.

I started football viewing center two months ago and all I could afford was a tv, a stabilizer and a small generator. I can't show more than a match at a time and also battling with a faultful generator. I would love to have two more televisions, a UPS, a fan and a standby gen. https://t.co/IpG7kQggsP pic.twitter.com/B5DoFQduiB

At the time of writing this report, his post has generated over 33,500 likes with thousands of quoted replies.

some of them below:

“If @Davido didn’t pick u, which I hope he wil pick u I wil support with standing fan….”

“You should have stopped at the first sentence. That second one does not represent you well.”

“Bro i dont have millions like @davido but pls drop your acct number in the thread. I have 3k i can dash you. Sorry its too small but that’s all i can afford.”

“Where is your location, I would like to support you with a UK used 42″ plasma TV, I deal on tokunbo product. Hope you wouldn’t mind?”

“Thanks boss am in ilesa, osun state. I don’t mind sir.”