Clip of Mercy Aigbe Telling Ladies to Extort Married Men Resurfaces After Saying She’s Not After Adekaz’s Cash, Nollywood actress Mercy Aigbe has been trending on social media since an interview she granted along with her husband, Kazim Adeoti aka Adekaz. 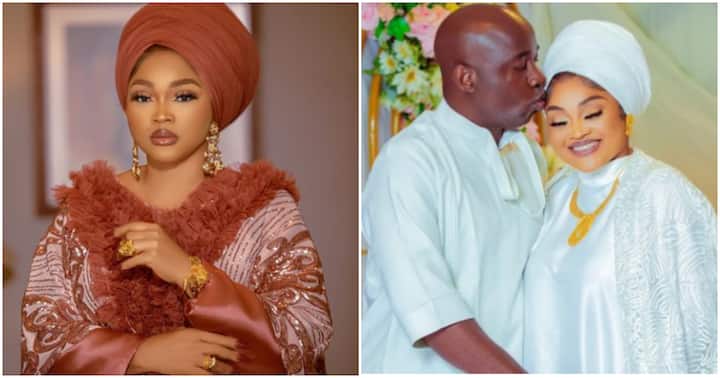 A portion of Aigbe’s interview saw the actress dismissing rumours that she only got married to the man because he is wealthy.

In light of Aigbe’s statement, social media users have now dug up an old video of the actress where she shared some words of advice to young ladies.

The clip which has now gone viral online saw the actress advising ladies against collecting flowers and chocolates from married men.

“If you are dating a married man, chop his money. Collect his money because that man is already married. What else are you doing? Some stupid girls are dating married men and are doing love…sis, he’s not yours. He belongs to another woman.”

“Wahala she has flogged her sef because Wo mi o ni so nkan nkan.”

“So in essence now she doesn’t love kazim she’s after his money abi.”

“But it’s all good…things change & she has the right to change her opinion too …let her be…she is happy.”

“Someone needs to show her this video.”

Kegs of petrol distributed as souvenir at Owambe, host returns to apologize