Rijau LGA, Niger state – The remains of Deborah Samuel, who was burnt to death in Sokoto on Thursday, May 12, over alleged blasphemy, have been laid to rest, according to The Nation. 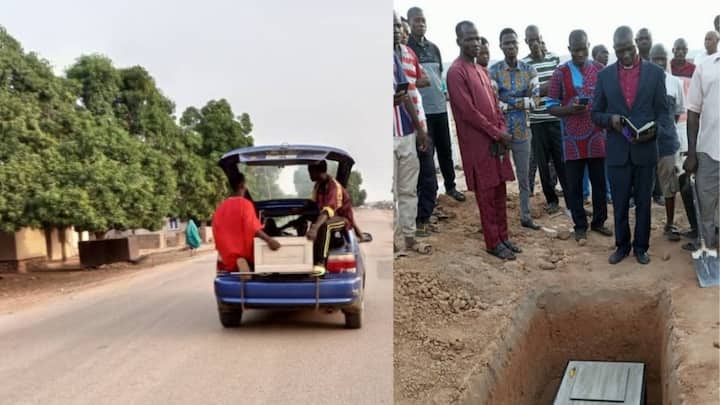 The newspaper stated that Deborah was buried in her hometown, Tunga Magajiya, in Rijau local government area of Niger state.

Tears flowed freely as she was being buried as well-wishers and relations lamented how she was killed.

Sharing a video of the burial, The Nation added that Deborah was buried around 6:30pm at the Christian cemetery in Tunga Magaiya.

It was reported that her uncle, who is the Pastor of ECWA in Tunga Magajiya, Emmanuel Maaji, led the prayers at the cemetery before she was lowered to mother earth.

Controversies over Deborah’s burial Meanwhile, we reported that a report by the News Agency of Nigeria (NAN) does not indicate Deborah’s remains has been buried.

The report, however, stated that Pastor Maaaji confirmed the arrival in Magajiya of the body of the slain student of Shehu Shagari College of Education, Sokoto on Saturday, May 14.

Maaaji, the pastor to the deceased’s family in charge of the church in Tunga Magajiya, was quoted to have said:

“The family is insisting that late Deborah Samuel be buried today because they are not happy with the way the government is handling the issue.”

Maaaji said that the late Samuel’s mother “has been unconscious since she heard the news on Thursday, which led to a rise in her blood pressure while the father has been inconsolable”.

He alleged that the body of the late Samuel was brought in a chartered bus.

The pastor, however, said

“the government called and said that it is not right for the family to take the body in that manner without informing the government of Sokoto state.

Maaaji said that although he could not recollect the name of the person who called, the person claimed to be representing the government of Sokoto State.

Similarly, Rev. Danjuma Doma, Coordinator, Christian Association of Nigeria (CAN) in Rijau Local Government area of the state, confirmed that the family and church were preparing for the burial.

“We are preparing for the burial. She will be buried today.

“We are all here to give the family support. We will update you on the situation as it goes,” he said.

Fans spoil Pere with billboard, N10m, designer items, other gifts as he turns 37

“I apologize for living a lie” – Chacha Eke ends 9-year-old marriage with husband,…