Through Thick and Thin: Eniola Badmus Wows Fans As She Shares Before and After Photos With Davido, Popular Nigerian actress, Eniola Badmus, has left fans buzzing after photos of her transformation went viral on social media. 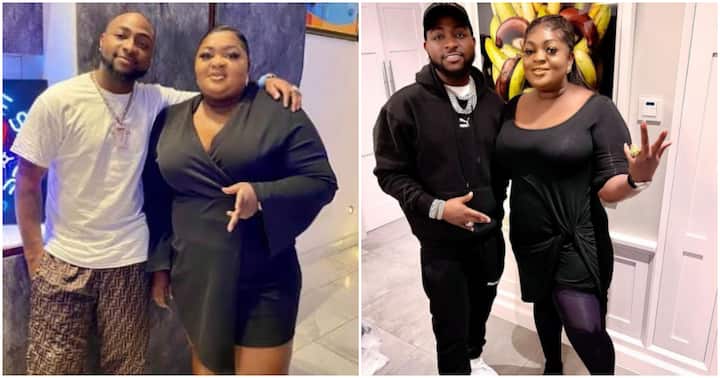 On March 8, 2022, the formerly plus-sized actress took to her Snapchat page to share an old photo alongside a recent one showing her appearance.

In both photos, Badmus was captured with her friend and top singer, Davido, and it made the difference in her stature clearer than ever.

On one hand, the actress looked very puffed up as she posed with Davido in the first photo. However, the second photo she took with the singer showed just how much she had trimmed down.

Eniola Badmus’ photos with Davido later went viral online and internet users had a lot to say about them.

Many netizens commended the actress over her new look. Read some of their comments below:

“Wahala be like weight loss.. clearly she actually looks perfect.”

“Nothing amazing for there.”

“I think she’s loosing it too far.. just thinking o.”

“She really did well for herself.”

“Love the transformation… So many ladies should try and do same…not just to eat anything and feel, being fat is okay… it’ll help you alot to be in good shape.”

“He was always there. Through thick and thin.. ❤️.”

IWD: Mercy Johnson shares video of her roles as wife, mum and actress

Prettiest among them all, many say as Sophia Momodu shares new photos