If you’re among the few people who haven’t seen the hit series, Blood Sisters, then there are two things you’re certainly going to like – the stellar performances and the equally high fashion moments. 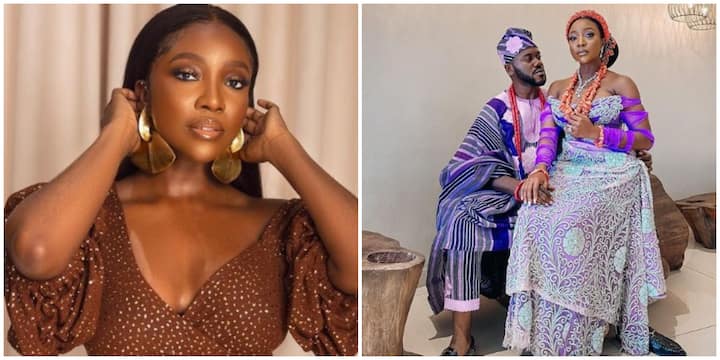 Speaking of fashion, Nollywood actress, Ini Dima-Okojie who played the character, Sarah, was one of those whose every scene saw her slaying in different looks.

One of her looks which stood out for a lot of people was the traditional wedding ensemble in the first episode of the four-part series.

The stunning faux wrapper designed by celebrity stylist, Bibi Lawrence clung to her feminine silhouette so effortlessly that even though the character battled with taking a stand for herself, she exuded elegance nevertheless.

We reached out to the designer to share some interesting details about the dress created with custom made fabric shipped into the country.

This is what she had to say:

“The fabric was custom made and fully embellished. So that took a couple of weeks to make and bring into the country, then a couple more weeks to put the dress together. So in total about 6week to 8weeks.”

Swipe to see more of the look below:

“The Way She Looks At Me” – Patience Ozokwo Says As Her Look-alike Daughter Stares Lovingly At Her, Reveals “Better Days Are Ahead”