Lagos Socialite Ogbulu Chidinma who Shared Petrol as Souvenir at Party Sentenced to Two Years Imprisonment, Award-winning fashion stylist Ogbulu Chidinma Pearl has been handed a two-year imprisonment sentence for sharing to guests kegs of petrol as a souvenir at her installation party. 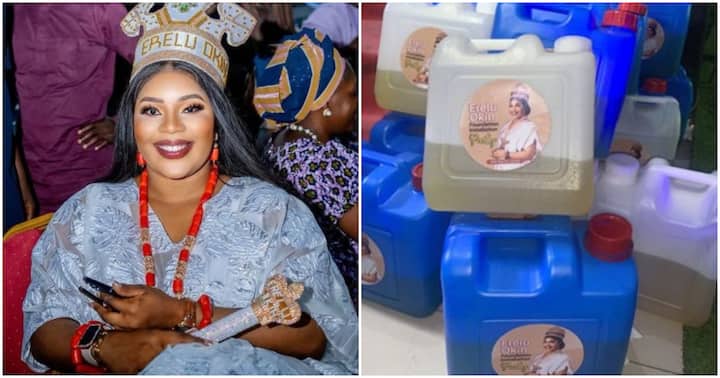 The Lagos socialite was given the sentence by the Lagos State Special Offences (Mobile) Court sitting at Oshodi on Thursday, March 24 after she was convicted with some evidence by the prosecution and following her guilty plea.

Following a viral clip from the installation party on March 5, 2022, the Lagos state government had sealed off the Havilah Event Centre, Victoria Island where the party was held, for contravening public safety rules and consequently arrested as well as arraigned her on March 14.

Chidinma was sentenced with an option of fine

Channels TV reports that the sentence also came with a one year imprisonment or an option of N500,000 fine on the third count.

Nigerians react to the court’s judgement

“Why not go to a patrol station and pay for one full pump give your people a ticket to get access to the fuel while they drive through.”

“She didn’t have a good lawyer, do we have souvenirs Law in Nigeria?

“A good lawyer will get her payment for damages….”

“See how hasty they were with her case; There are more serious cases involving our politicians in court that have been lingering for years. Pathetic.”

“Dem don use opportunity to collect money, problem no finish as she try to enjoy.”

The love he needs: Monalisa Chinda visits Mr Ibu, plays with him in cute video