Femi Adebayo, other stars arrive on horses at his carnival-like movie premiere 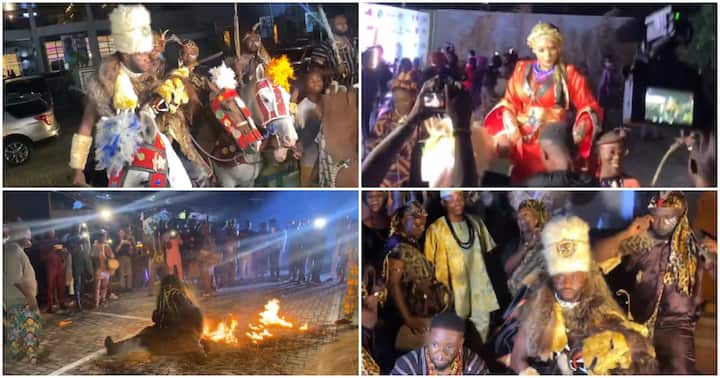 The event went down at the popular IMAX cinemas in Lagos on Sunday, April 4, and unsuspecting passersby may have assumed an epic battle of sorts was going on at the venue.

Invited guests and members of the cast all adhered to the theme of the night which saw them appearing in costumes similar to that of traditional warriors.

The man of the moment, Adebayo, showed up in a traditional battle commander piece designed by celebrity stylist, Toyin Lawani.

Adebayo arrived at the venue of the premiere on a horse amid fanfare from people at the venue.

Watch a video of his arrival below:

See a video showing her grand entrance below:

Other movie stars like Toyin Abraham, Mercy Aigbe, Joke Silva, Kunle Afolayan among others also showed up to celebrate with Adebayo.

More videos from the star-studded movie premiere are below:

“This is the real premier, thanks so much for bring back our culture, we love you.”

“Femi displayed class abeg. The way all these English actors look down on Yoruba movie premier ehn…but this is classy, rich and different.”

“Kudos to Femi, I’ll definitely go watch for all his efforts on this.”

“This is hilarious. Good to celebrate and respect our culture.”

I’ve forgiven all who offended my family – Maryam Abacha

Man throws new clothes on mum, sprays her money in clip, many condemn his action