‘Flirtatious’ Monkey Tries Hard to Get Under Nancy Isime’s Dress, Sparks Funny Reactions As Video Goes Viral, Popular media personality Nancy Isime has stirred reactions in the online community after she was spotted in a funny video. 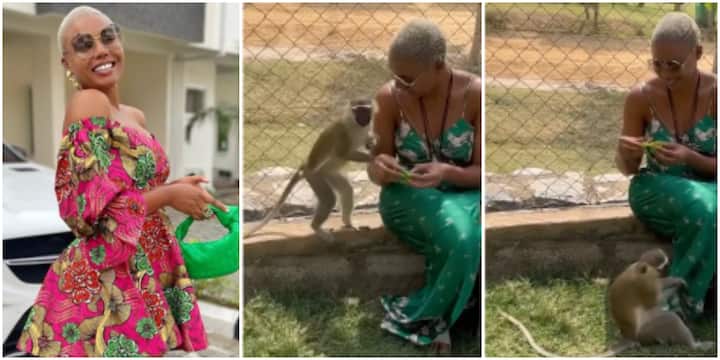 From indications, the actress and TV host visited a zoo and she couldn’t help but get a little familiar with some monkeys that were roaming freely.

Isime managed to draw the attention of the animals with goodies she had for them but one of the monkeys had its own mission.

The monkey tried on several occasions to get under the actress’ flowing gown while ignoring the goodies she had at hand.

Even after the media personality stood up, the animal still raised her gown and tried to get a spot under it.

Watch the funny video below:

“Why is it checking under her dress something fishy is going on.”

“The monkey wan see beneath your beautiful!!!!!!”

“I no fit play with monkey oh make them no go slap me.”

“Wetin me never fit do monkey wan do am this animals don’t know their lane again o.”

“What is the monkey looking for under her shokoto.”

“Hmmm attracted to green until e comot your Paynt .. I sha no wan hear justice for anybody o.”