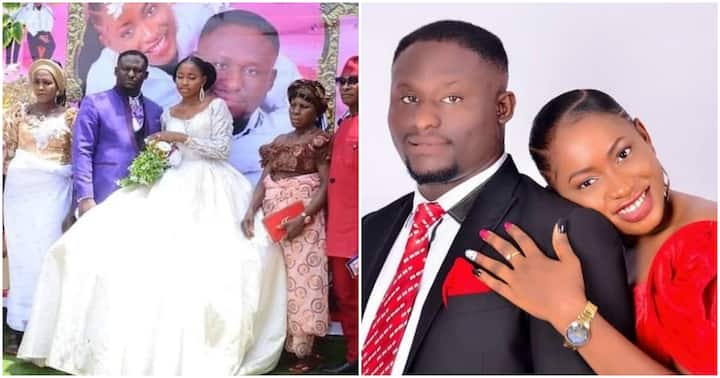 A Sunday, February 27 report by Ika Weekly Newspaper stated that the duo met at the aforementioned school in 2013 during Sammy’s teaching practice there as an economics teacher.

Describing his marriage to a lady he once cherished as a student as a dream come true, the businessman expressed joy that what had begun as a child’s play is now a reality.

He explained why education is not a scam

He expressed profound gratitude to the Nigerian education system for bringing him together with his missing rib.

He knocked youths who view education as a scam stating that it presented him with the best gift in life.

“My wife remains the best achievement I got during my teaching practice time, despite the fact that TP teachers are not paid for their service. I left Orient Academy Group of School finding my missing rib…

“In all, my wife is a huge blessing to me. And I thank God for giving the grace to wait for her to finish her secondary and higher education. Conclusively, the love which we share has kept us together that despite the long waiting, we have not given up on each other,” he said.

Speaking on their union, the former head girl advised spinsters to have self-control while looking for life partners rather than jumping from one man to the other.

She went on to appreciate God for keeping them to fulfill their destinies of becoming husband and wife.

Photos of the newly wedded couple shared by @lindaikejiblog on Instagram sparked debate on social media.

“Because I told one of my class mate that this particular teacher this thing big, no so so flogging I chop for staff room that day and I cannot forget.”

“If I see my former girlfriend from 2013 like this, i ready marry her…. Babe was legit a good girl…. Sapa no just let man think straight that time…This life sha…”

“Make i go find out maybe that my biology teacher still dey single.. She too fine that year.”

“Shey I no go come start teaching job like this…maybe I will find loml…teacher/ student romantic relationship is kuku allowed in our education system.”

A night of glitz and glam: Mercy Aigbe, 9 others slay at Faithia Balogun’s party