Young Girl Beats Boy Silly in Boxing Game, Nigerian Man Promises Her N50k, Videos Stir Mixed Reactions Online, A female Nigerian kid has shown that when it comes to boxing, she is both the king and queen of the ring. 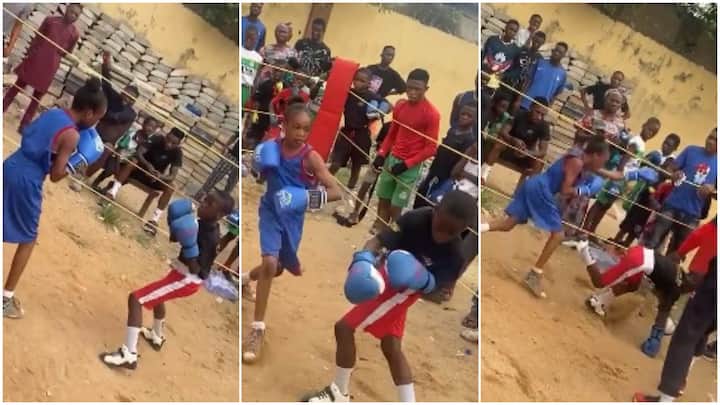 The girl used her longer hands to her advantage over the boy as she got many clear shots at him. His efforts to parry her blows did not work much.

Just when the girl’s blow was about to knock him out, the referee called a timeout. A video well captured the moment the boy spun at the heavy blow of the girl and had to brace himself with the ring’s ropes. It was such a keenly contested game.

In response to her excellent fighting, a man with the Twitter handle @BikiniDoB promised to give the kid the sum of N50,000 so she can buy more kits.

I will donate 50k naira for her kit and if it's more than that I will add to it ..how can i get the money across to her? https://t.co/bo4S1lqpkk

“These guys are kids. They both did fine. Yes I know you will say we should help who we want to as well. But in cases likes this,when you want to extend love,let it go round. It encourages these young chaps..if the girl was beaten,peeps would still want to favor her. Unfair world.”

“The boy no deserve kits okwa ya? All of us are congratulating him. Who go buy for the boy? Abi he doesn’t deserve encouragement and a bright future?”

“Get the money across to both of them.”

“So because the boy got beaten , he no deserve love?”

“I usually won’t reply you but I will,you have a chance to also play a part by helping the boy..I chose to help the girl, nothing gives you the right to question what i choose to do.”