She Sounds Like Imade: Girl Says “36 States” Like Oyinbo in Video, Someone Compares Her to Davido’s Daughter, A video of a little girl trying her hands at reading “36 states and capital” has attracted the attention of many people on the internet. 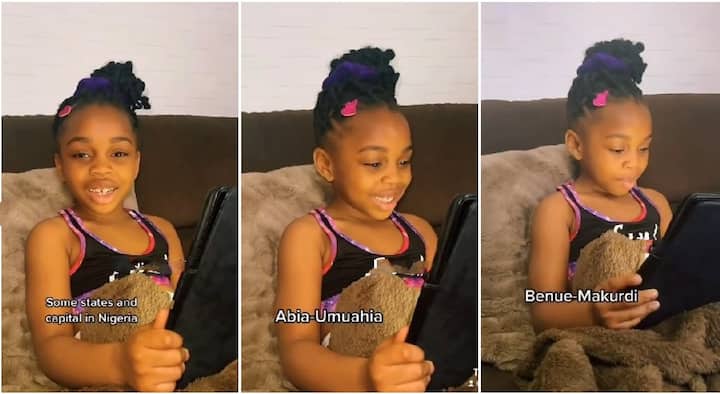 The video showed the girl trying to read the popular recitation with Oyinbo accent, but it wasn’t working.

She mispronounced most of the states’ names, making many people to laugh and roll on the floor.

The “36 states and capital” is a popular recitation among Nigerian kids in nursery schools. Many of them usually know how to recite them at a very early stage.

Although the little girl in the video read from somewhere, she was unable to clearly pronounce the names which she is not conversant with.

The video got so many reations when it was shared by @mufasatundeednut.

See some of them below:

“Buchi in the mud, wahala for mercury, Aba turn state o,……wahala for accent.”

“This is hilarious ! She sounds like Imade so much.”

“I love how she pronounced Cross river -Calabar.”

“Why am I hearing this in my daughter’s voice …lmao.”

“Kai, Abia state must collect in everything… God have mercy.. umiaa.”

“I swear I heard anambara Did she just call Bauchi as Buchi.”