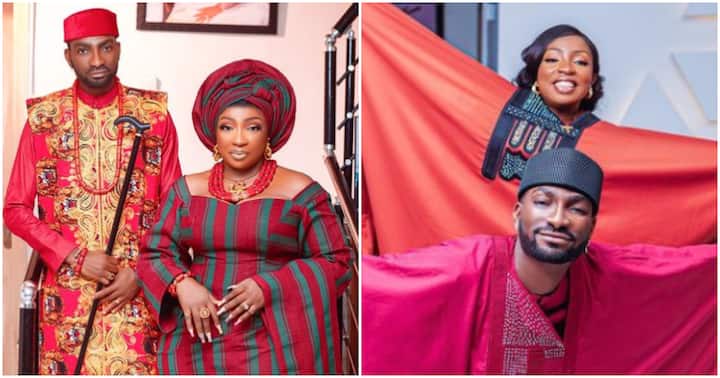 MC fish took to his Instagram page with a post where he appreciated how much the bond he shares with his wife has grown.

They said we would not last a year

According to MC Fish, when he and Anita got married, people thought that they were faking it and they would not survive the first year.

“Two years ago a Yoruba man from ondo state married an Igbo woman from Nsugbe in Anambra,people felt they were faking it , some even said it won’t be possible, others said we wouldn’t survive a year in this marriage of ours , they even said it was a publicity stunt and photo shoot . But yet here we are still going strong.”

The happy husband added that despite all the negative words that trailed their marriage, he doesn’t know how his life would have been.

“I don’t know how my life would have been if u didn’t come my way but I thank God for the day I met you.”

MC Fish then went on to celebrate and praise his queen for being the best for him, and also showered prayers on their union.

“Happy anniversary my queen , you’re a Amazon , a good mother , a good wife , a brilliant entrepreneur, my ride or die, I pray on this day that our union continue to be blissful and joyful  .I love you ANITA JOSEPH OLAGUNJU @motherhenanita ❤️❤️❤️

A post shared by Real Mc Fish (THE CHOSEN ONE) (@realmcfish)

Fans, followers and colleagues of the couple dropped sweet messages as they joined in the celebration.

“Awwwwww❤️❤️❤️❤️❤️ May the fire of this union be rekindled with the dawn of each new day, just as the morning dew reawakens the flowers of the field each new day❤️❤️❤️❤️❤️”

Angel gets 2 plots of land, other amazing gifts from fans on her 22nd birthday