He broke up with me because of my long legs, tall lady shares her look in video

Tall Lady Goes Viral for Her Long Legs, Says Boyfriend Broke up with Her Because of it, Video Causes Stir, A young lady has become an internet sensation due to her long legs. 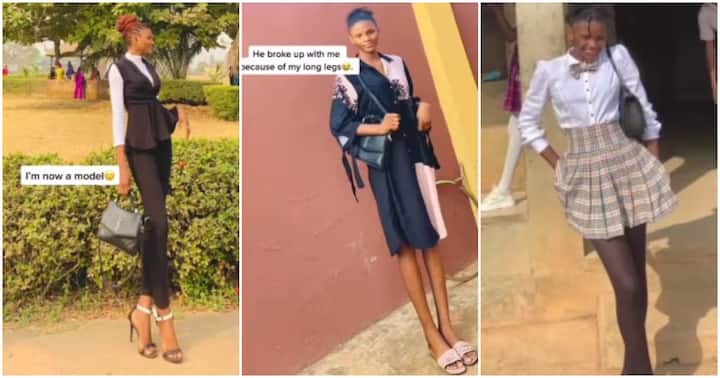 In a photo collage and video @yabaleftonline shared on Instagram, the lady said her boyfriend broke up with her because of her long legs.

Moving on from the relationship failure, the lady said she is now a model. She shared a video of her cat walking as if practicing for a runway performance.

Mixed reactions have greeted the lady’s clip and photos as some nursed doubts over its authenticity.

“I love the fact that she still wears high heels. I’m 5”11 and I feel too tall when I’m even on the lowest heels..”

“Wow if i get this kin legs na to carry am waka out of naija straight to Canada.”

“Lol he no see your long legs before abi u hide am before? Una go just dey post anything…”

“If he broke up with her because of her long legs, why did he start dating her in the first place? It’s not as if they appeared out of nowhere.”