He don grow finish: Fans gush over heartwarming photos of Ifeanyi and Chioma

Davido’s Chioma Melts Hearts With Some Mother and Son Moments With Ifeanyi As They Get Playful in the Pool, Singer Davido’s baby mama Chioma, also known as Chef Chi, recently shared photos with her son Ifeanyi having fun in a pool. 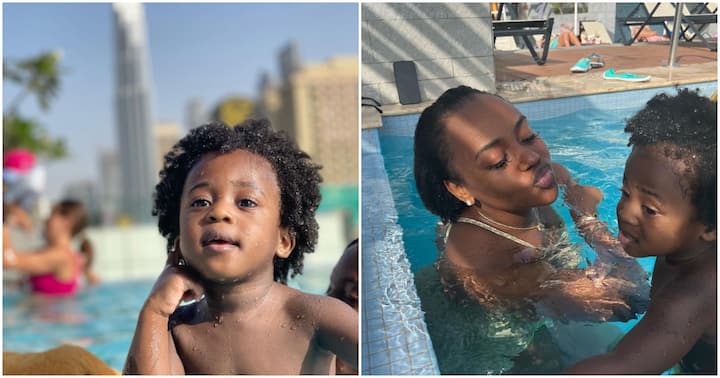 Chioma shared the photos via her social media timeline, and in one of the photos, Ifeanyi was seen wanting to get out of the pool.

In the caption, the mother of one wrote:

The post is coming days after a Twitter troll had claimed Ifeanyi was not Davido’s son but belonged to Peruzzi.

The online troll claimed that Davido used Peruzzi’s son, Ifeanyi, on his album cover and that it doesn’t guarantee success.

Davido had taken to his social media timeline to tackle the troll as he vowed to deal with him.

The singer went on to say trolls are allowed to drag him, but they should leave his children out of it.

Nigerians, including celebrities, have since taken to the comment section to react to the photos as they hailed Chioma and Ifeanyi.

“Watch this picture trend for the whole year ❤️❤️❤️❤️ Pappy .”

“you see David pikin you no go no shame my child.. you are blessed and you shall be 1 million better than your parent. Amin.”

‘Does comedy give this kind of money’ – Nigerians ask as Instagram comedian, SirBalo buys another N100m mansion in Abuja