“He loved me unconditionally despite having 4 kids”: Lady shows off lover

Mum of 4 Gets Pregnant with Twins after Being told She Would Never Give Birth Again, Shares Emotional Video, A mother has appreciated her lover for standing by her during her trying times and doing what she never expected anyone to. 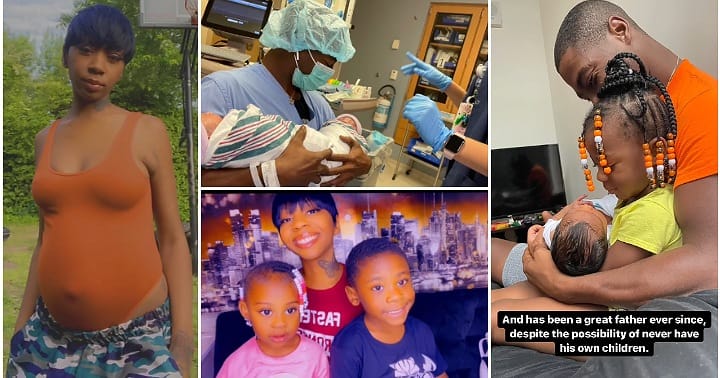 The beautiful lady narrated how she got pregnant for her ex lover who dumped her during pregnancy.

Doctors said she was expecting twins and her ex abandoned her saying he wants nothing to do with them.

Luckily, she met a man who accepted her and took care of her while she was pregnant. He didn’t have any children.

Doctors told her she would never be able to have another child again after birthing her twins but the man stood by her. He was ready to be with her against all odds.

As luck may have it, soon after birthing her twins, she was told by doctors that she had gotten pregnant again. She’s currently expecting twin babies.

“In February 2021, I found out that I was pregnant. Their dad didn’t want them….I prepared myself to be a single mother of 4! I started embracing the journey alone…..

“Then, I met a man, he didn’t have any children at all. He chose to be with me through my pregnancy even though doctors said I could near have children again after the Twins.

He was there when I gave birth and has been a great father ever since despite the possibility of never having his own children.

Two months after the twins, we found out that we were expecting!!!And its twins AGAIN!!!Due: Sept 2022″

Reacting to her story,

“Wow this is such a beautiful story. May God bless you and yours.”

“Awwwww this drove me to tears. Love Truly exists.”

“Wow. If this isn’t love then I wonder what is. Congratulations on finding true love.”

“So adorable. You children are blessed beyond measures. More happy days.”

You will fall in love: Johnny Drille’s songs that are not for ‘singles’