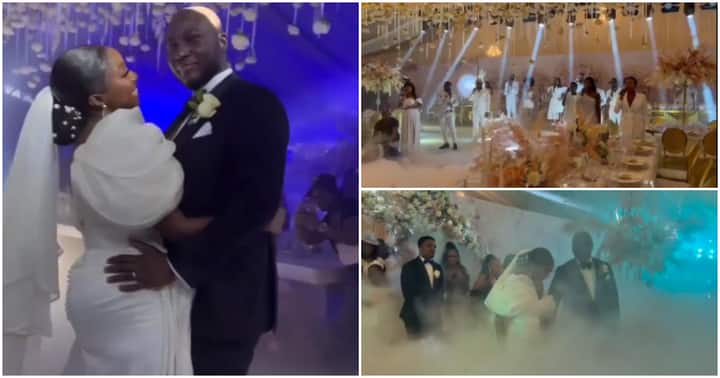 The event just like the previous one was a star studded affair as friends and colleagues of the actress turned up in their numbers to celebrate the last leg with her.

A beautiful moment at the wedding reception was Ini and Abasi’s entrance into the hall. A group of amazing vocalists sll dressed in white were waiting for the couple as the atmosphere in the hall transformed into a mushy one.

The actress and her hubby walked into a smoke of artificial clouds as the vocalists sang a beautiful love song. Guests could bot help but melt as they captured the moment.

The other love songs saw Ini and Abasi in a tight embrace as they swayed and looked into each other’s eyes.

After the mushy moment, the band played another song and Ini could not help but throw caution to the wind as she danced and sang happily.

A post shared by African Weddings and Beauty (@ms_asoebi)

Nigerians gush over the video

“This is so beautiful “

“See me blushing all through☺️. Love is indeed beautiful ❤️”

“This love go reach everybody.”

“Everything about this wedding ceremony was just perfect and top notch”

4 Nigerian musicians who included their children in music videos (Photos)