Is He Someone’s Husband? Reactions As Mr Ibu’s Daughter Continues to Hide Boo’s Face on Their Wedding Day, Veteran Nigerian actor, John Okafor aka Mr Ibu’s daughter, Chioma, has now finally walked down the aisle with her US-based lover. 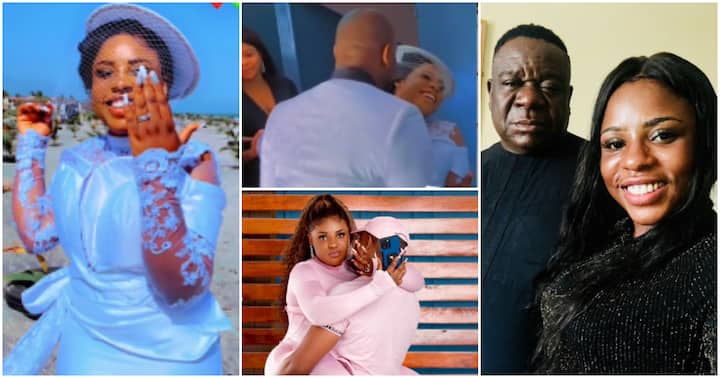 Photos and videos from Chioma’s court wedding ceremony with her mystery man have made the rounds on social media.

In the photos and video, Chioma continued to hide her husband’s face from the camera.

In one snap, the happy new bride showed off her wedding ring. In another photo with her man, she smiled sweetly for the camera while a lovestruck emoji was used to cover her boo’s face.

Also, in a video from the event, as the couples shared their first kiss, Chioma’s groom was seen backing the camera to the surprise of fans.

Chioma had earlier revealed on social media that she had met her man on TikTok and they got married about two months later.

See their pre-wedding and wedding snaps below:

While a number of people celebrated with Mr Ibu’s daughter on her marriage, some fans’ curiosity was piqued as they wondered why she continued to hide her man’s face even after they tied the knot.

“Why she Dey cover his face na . You better bring am come vawulence headquarter make we help you verify am .. I come in peace.”

“God bless the marriage. Two months is nothing. Adam and Eve was just a day.”

“Why she hiding his face na.”

“Why’re they hiding his face?”