It Took Four Miscarriages Before You Came: BBNaija’s Gifty Finally Reveals Son’s Identity as He Clocks 1

It Took Four Miscarriages Before You Came: BBNaija’s Gifty Finally Reveals Son’s Identity as He Clocks 1

Big Brother Naija star, Gifty Powers welcomed her second child, a boy in 2020 and on his first birthday, September 27, she penned a heartfelt note on social media. 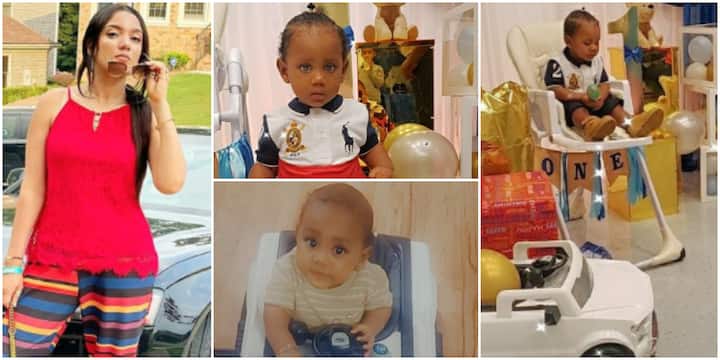 The reality star revealed how she struggled with four miscarriages before finally having her son, and she also used the opportunity to reveal his identity.

Gifty Powers bares it all

The mum of two expressed how much joy her son, Elijah, has brought into her life and she will forever cherish being his mother.

She continued by thanking God for her bundle of joy after four miscarriages, tears, fasting and prayers.

Gifty noted that her life and home changed the moment she held her son for the first time and he has put the family under a beautiful spell.

She shared a photo of her son finally, and disclosed that even though she can’t hide him forever, she will fiercely fight anyone who tries to hurt him in any realm.

“Dear Elijah, God’s favourite friend, birthing you is one of the greatest joys i have ever experienced in my life, and i could never have asked for more. The thought of being called your Mother gives me a googolplex feeling that i will forever cherish.”

“I thank the Lord every day for blessing us with you – it took me 4 miscarriages before you came along – we wailed, we fasted, we prayed, but God knew what he was preparing – indeed our ways are not of God’s but his, and with that, i am so much very thankful.”

“Now, i know i may not hide/protect you forever (physically tho) – in as much as i would love to, but hey – that would be so selfish of me not to show God’s beautiful creation to the world, and if anyone – i mean ANYONE, tries as much as to think or even as to dream of hurting you both spiritually and physical – (scoffs) then they will know that i serve a LIVING GOD and NEVER A DEAD GOD.”

“Happiest birthday to you Elijah.”

“He is adorable! God bless you and your family.”

Reality star, Tacha finally confirms ‘she worked on her body’

Man Sheds Tears of Joy As Nigerian Wife Gives Him Car on Their Wedding Day, Video and Photos Stir Reactions