I Want to Be Like Tyson & Anthony Joshua: 12-Year-Old Nigerian Girl Who Beat Boy in Boxing Match Says in Video, A 12-year-old Nigerian kid, Ademodi Maria, whose boxing story went viral in March for beating a boy silly during a game has spoken in an interview. 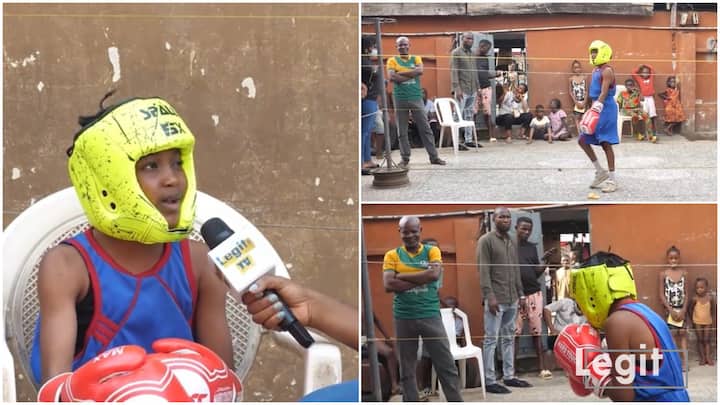 I do not pick fights on the street

According to Maria, some people who pretend to be her friend sometimes taunt her, asking if she could fight and defeat them.

The kid revealed that she trains for four hours daily, adding that despite her skill, she does not fight on the street.

I felt nothing after beating him

Maria believes that she can use her boxing skill to protect herself against harm. When asked about the game where she knocked out a boy, the 12-year-old said she felt nothing.

The kid who weighs around 28kg said there is no feeling whenever she beats boys up in a boxing ring. Maria added that she also does not know what goes on in their minds.

I have never lost

Maria added she cannot count the times she contested against boys in a ring. Despite the matches she has been in, the 12-year-old has never lost any.

Maria’s father revealed that when the girl started learning boxing, people always complained that he is allowing a fine girl to engage in such a sport.

Watch her video below:

“Everyone in the family is a boxer.. aah aah..”

“This is the real reason why my daughters will go into combat sports, just for self defence.”

“I pray a legit sponsor shows up to boost your career.”

“God wiill grant your heart desires. I pray you achieve everything achievable in Jesus name. I will be happy the day my pilot will be you.”

“It seems am gonna enrol my 9rs old daughter into boxing, just for self defense.”

“Baby girl move on D LORD IS UR STRGNTH, ND IS AT UR SIDE IJMN.”